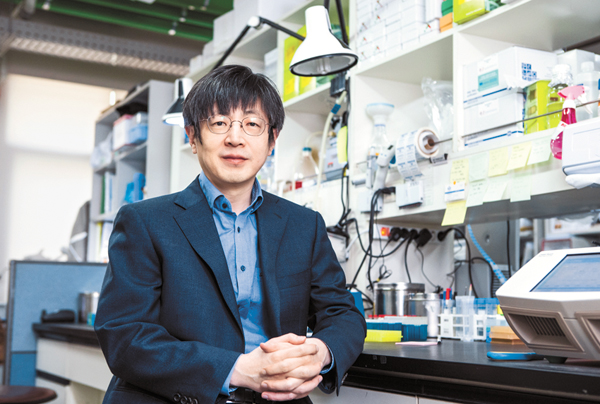 Kim Jin-soo of the Institute for Basic Science emphasizes that the global competition to develop genetic scissors technology is fierce. [KIM SEONG-RYONG]

A tenured professor at Seoul National University has chosen to become a contractor at one of the nation’s research institutions. Kim Jin-soo, 52, started working at the university as a professor in April 2014, but last month, he decided to tender his resignation and focus on researching a topic that has long interested him.

As a result, he is now serving as a director of the genome editing research team at the Institute for Basic Science, where he is one of the leading researchers in the area of genetic scissors, which allow researchers to remove specific genetic elements.

MIT Technology Review has cited genome editing as one of the year’s top 10 breakthrough technologies, naming Seoul National University as a key player in the field, along with the Sainsbury Laboratory, John Innes Centre and the University of Minnesota.

While he was at Seoul National University’s research center, Kim and Prof. Kim Dong-wook of Yonsei University found a way to reverse the clotting factor deficiency that causes hemophilia A.

Q. Have you ever regretted resigning from your tenured position?

A. It would be a lie if I said I have never thought about going back. I was working at a biotech company called ToolGen, and I came to Seoul National University in 2005. I got tenure in 2014, and I gave it up after just two years. It wasn’t an easy choice to make.

Is there a specific reason that you chose to join the research center?

I wanted to focus on my research without having to worry about research funds. The Institute for Basic Science is funded by the government and receives some 7 billion won ($6.1 million) a year, which is quite enough.

Then again, the research team gets dismissed if our performance is lower than expected. But I believe the genetic scissors sector is the one that deserves a shot.

How competitive is the field globally?

If our research is delayed by just a few days, other researchers around the world publish their own research that is very similar to ours. It is very competitive worldwide.

What can this technology be used for?

Genetic scissors are similar to the kitchen knives we use. We can make new treatments and use it to produce better crops without having to worry about the negative effects coming from genetically modified organisms, or GMOs. Furthermore, one could cure or prevent diseases through genome editing technology.


What are some of your plans for the future?

Korea’s genetic scissors technology is very strong, even when compared to countries such as the United States and China. We have successfully developed ways to edit human genes and, for the first time in the world, created a device that can check for malfunction in cells.

I would like to move forward and focus on new research that no one else has yet touched upon.