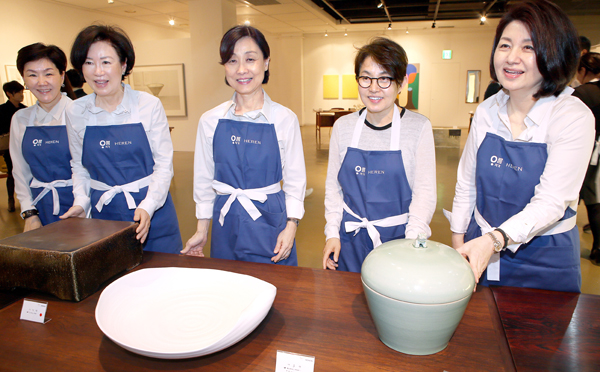 From left: Hong Jeong-won, Lee Un-kyung, Yoon Young-tae, Seok Young-ho and Kim Yu-hui, who make up the managing committee of the Arumjigi Culture Keepers Foundation, sell items during a bazaar at the Horim Art Center in Sinsa-dong, southern Seoul, on April 28. [KIM CHOON-SHIK]

The moment the doors opened, JNB Gallery was packed with customers, and the line outside stretched from the basement-level entrance all the way to the first floor. It was late April, and the gallery, located at the Horim Art Center in Sinsa-dong, southern Seoul, was holding a bazaar co-hosted by the nonprofit Arumjigi Culture Keepers Foundation and the premium membership magazine Heren.

The Arumjigi Culture Keepers Foundation, whose mission is to preserve and promote Korean culture, has held the fund-raising event for seven consecutive years. Profits made from the event are used to fund education projects that pass on the knowledge of Korean culture to the nation’s next generation.

This year, the bazaar was split into several different themes. Among them were a fashion zone, where popular brand products from Korea and abroad were sold; a vintage zone, where items that had been donated to the cause were put up for sale; and an arts and crafts zone, where the works of famous artists and master craftsmen were put on display.

Sisters Kim Ji-yoon and Kim Joo-hyung, both in their 30s, visit the bazaar every year. This year, they purchased a Hermes necktie as a present for their father for 60,000 won ($50). Although it’s a secondhand tie, they said their father would be pleased when they tell him the purpose of the bazaar.

As in previous years, the products provided by Ongium, a research center under the Arumjigi Culture Keepers Foundation that studies the basic necessities of Korean life, were most popular. This includes traditional goods such as cheonrijang, a delicacy made by boiling beef, drying it, grinding it into a powder and then cooking it with soy sauce, as well as five-colored thread cushions that are said to have been used during the first birthday celebration of Korean crown princes.

“This year, jinpicha, a tea made of roasted Jeju tangerines, was very popular,” said Cho Eun-hee, who is in charge of the department tasked with preserving traditional taste at the culture center.

The celebrity zone, where celebrities themselves sell products, attracted great interest. One such celebrity was former model and entertainer Hong Jin-kyung, who passionately promoted the bag brand THAVMA while holding five to six bags on each arm. Former model Song Kyung-ah was selling her own bag brand at the bazaar, too.

The young friends zone, which was opened for the first time this year, featured 10 brands that were selected by a group of 40 young members of the cultural center.

The organizers estimated that some 1,500 people visited the gallery and helped raise a total of 200 million won.