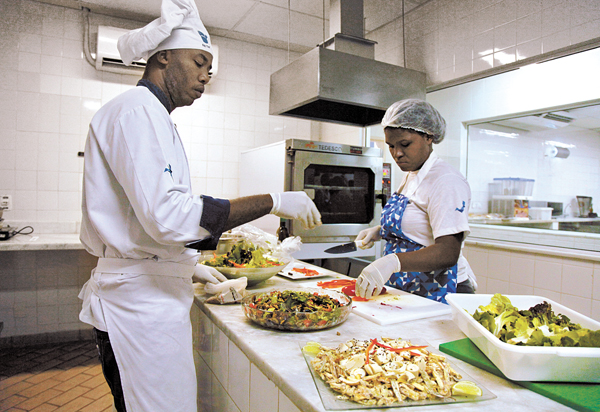 Cooks prepare meals in the dining room of the athletes village at Rio de Janeiro, Brazil. The staff at the facility will prepare all types of meals for athletes from around the world, including Korea’s kimchi, as well as 40 varieties of Brazil’s exotic fruits for the Olympians this summer. [AP/NEWSIS]

RIO DE JANEIRO - The dining room for the athletes village at the Rio de Janeiro Olympics will be bigger than two football fields, and the kitchen being built in the same massive tent will be as large as one.

The setting hints at quite a spread when the games open in just under three months.

“We want to make sure when there is a medal or a record, part of that record also goes to our food team,” said Marcello Cordeiro, Rio’s director of food and beverages.

At its peak, the athletes village kitchen will prepare 60,000 meals daily, produced from daily shipments of 210,000 kilograms (460,000 pounds) of raw ingredients - all served up on 4 million biodegradable plates for 18,000 athletes, coaches and staff.

Food for Muslim and Jewish athletes will adhere to their specific religious dietary laws. Koreans will even get spicy kimchi, scallions and assorted vegetables, shipped directly from home.

And everyone can try 40 varieties of Brazil’s exotic fruits such as caju, acai, carambola, caqui, goiaba and maracuja, often squeezed into Brazil’s famous juices.

The subsequent Paralympics will offer the same variety, though the numbers will be smaller.

“We are confident our Brazilian food is going to be a success, we’ll make a bit more to be safe,” Cordeiro said. “We are doing our best to bring the world to Brazil.”

He listed key ingredients of the basic Brazilian diet: rice, black beans, farofa (flour from toasted cassava often sprinkled on top of food) and meat. But the regional specialties are as large as the country itself.

Buffet-style eateries, called “Kilo Restaurants”, are popular in Brazil, where they charge by the weight. There will be no charge for athletes.

“They can eat all they want,” Cordeiro said. “No scales. We know athletes know exactly what they need to eat.”

To prepare the final menus, Cordeiro and colleagues are holding about 20 food tastings before the Olympics open Aug. 5. They’ve been through seven or eight already, including one a few days ago.

“Imagine you start eating at 10 a.m. and you finish 8 p.m.,” Cordeiro said. “Everyone thinks that food tasting is super-duper, but this is how you eat.”

He demonstrated by lifting a tiny sandwich slice up to his nose, one made of ham, mozzarella, cream cheese and lettuce. He checked for texture and presentation and finally took a small bite. Next he graded the offering on a checklist.

“I’ll tell you the truth, I can’t stand the tasting,” he said. “This means eating the whole day. Actually, not eating. Tasting. You bite and you leave it.”

Rio will also offer different breakfast styles. For the Japanese palette there might be rice and miso soup, or fish and natto, the gooey, pungent paste made from fermented soybeans.

The athletes village consists of 31 apartment towers containing 10,160 bedrooms. It is just one part of the Olympic food operation. Deborah Cordiner is handling most of the rest, including athletes’ food at venues, and support centers for volunteers and accredited guests.

“We always face the same challenges, the transport, the volume of food,” said Cordiner, a Scot who has worked at all but two Olympics - Salt Lake City and Sochi - since the 2000 games in Sydney.

She said athletes will munch on “tens of thousands” of sandwiches.

A spokesman for the organizing committee declined to give the names of catering companies under contract, saying they “are not sponsors, so they don’t have a right to be associated with the games.”

The International Olympic Committee and organizers receive billions from sponsors like McDonald’s.

Cordeiro said he is worried less about the menu, being prepared by about 20 chefs, than he is about food safety. He must guarantee the food is free from steroids or other ingredients that might cause an athlete to test positive on a doping test. A major offender is the steroid Clenbuterol, which is fed to livestock in some countries.

“Our ingredients are free of steroids and other chemicals, we are making sure our suppliers have all the certificates that are demanded by our national food and drug agency,” Cordeiro said. “People don’t know how complex it is to put out safe food. This is a very sensitive subject that could influence a result or an athlete’s medal.”