Korean, Japanese Buddhas to sit side by side

Korean, Japanese Buddhas to sit side by side 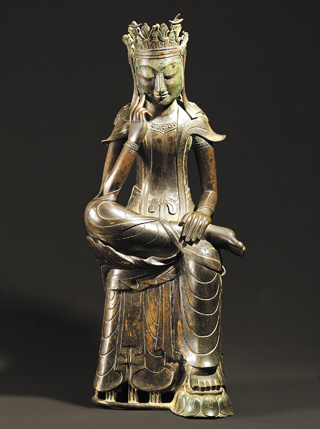 Although both are in the same pose, Korea’s two Maitreyas in meditation - National Treasure No. 78 and 83 - sat next to each other to let visitors to compare and contrast their artistic style at an exhibition organized in 2004 by the National Museum of Korea.

This time, one of them - National Treasure No. 78 - will be sitting next to a Japanese Maitreya in meditation, also called a pensive bodhisattva, starting tomorrow at the National Museum of Korea in central Seoul, marking the first time the two countries’ proud treasures are being exhibited together for the visitors to compare.

According to the museum, the two countries have held various joint exhibitions, displaying statues of Buddha, handicrafts and so on, but bringing together important national treasures from each country as subjects of comparison is unprecedented.

Established first in India, countless numbers of pensive Bodhisattva figures were made in central Asia and in China. However, they reached a pinnacle of artistic completion and became objects of worship when they came to Korea during the Three Kingdoms era (57 B.C. to A.D. 668).

According to Buddhist beliefs, if Buddhas are the ultimate enlightened beings who have transcended mortal concerns, the bodhisattvas are the ones who have chosen to remain in the physical world to help and guide others.

Although there are small differences in size, details and materials used, the pensive bodhisattva figures scattered around Asia are all seated with the right leg crossed over the left while the fingers of the right hand are gently touching the cheek, in a meditatative gesture.

The “Gilt-Bronze Pensive Maitreya Bodhisattva,” or National Treasure No. 78, that will be on display at the national museum from tomorrow is 80 centimeters (2 feet, 7 inches) tall.

One of the distinctive characteristics of this pensive bodhisattva compared to other statues, according to the museum, is that he’s wearing lavishly decorative headgear. Moreover, the details and the technique used to express his clothing that covers the lower half of his body has been the subject of praise.

“The drapes of the clothing, especially, have been cast in gilt bronze in regular thickness all the way through, which experts insist requires very sophisticated technique,” said a researcher from the museum.

According to the researcher, details of this bodhisattva are especially exquisite, adding that the oval pedestal on which the bodhisattva’s left leg is placed is decorated with a lotus motif. However, she added details of the right foot are missing for reasons unknown.

The statue’s existence became known to the public in 1912, and it has been kept at the national museum since 1916. However, the museum said it is unclear where it was enshrined or exactly where it was found.

“Based on the statue’s artistic structures and details, art historians believe that the statue was made in the mid- or late sixth century during which the Korean style of bodhisattva images emerged,” said the researcher.

Meanwhile, the ancient Japanese are also said to have created numerous pensive bodhisattva statues, but there are also only two large ones, each around 1 meter (3 feet) tall.

The pensive bodhisattva that has been chosen for this joint exhibition is the one that’s preserved at the Chugu-ji Temple in Nara Prefecture. This is the statue’s first trip overseas. 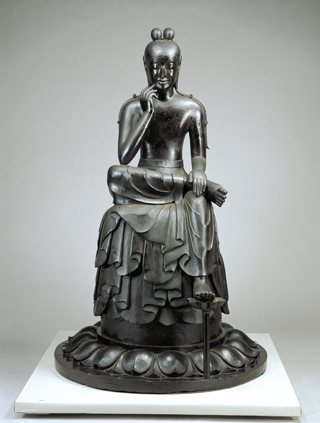 This wooden pensive bodhisattva is also a National Treasure of Japan and is said to be from the seventh century during the Asuka period. It is taller than the Korean pensive bodhisattva, standing 168 centimeters tall. Since it’s a wooden statue, 11 pieces of camphor wood were assembled to create the final piece.

Although taller, this pensive bodhisattva has a smaller head than the Korean statue and wears his hair in a two-way topknot. His torso is bare without any decoration of a garment. But he also has clothes draping down from the lower half of his body.

According to the researcher at the museum, the feature of a flowing garment is reminiscent of bodhisattvas made during Korea’s Three Kingdoms era, but added that having the bodhisattva facing straight forward, unlike the Korean ones that look down, and having a large circular pedestal on the bottom are unique features of Japanese bodhisattvas.

“Early this year, the Tokyo National Museum officially suggested holding the exhibition together,” said Min Byung-chan, an official from the National Museum. “It will be a great opportunity for the visitors to both countries’ exhibitions to witness distinctive differences and their originality in Buddhist art.”

For years, the National Museum of Korea has been trying to bring together the two country’s nearly identical pensive bodhisattvas, which are even more highly valued than the ones in the upcoming exhibition.

Korea’s National Treasure No. 83 and the wooden pensive bodhisattva that is preserved at Koryuji Temple in Kyoto, Japan, are both considered masterpieces among pensive bodhisattvas in each country. However, it is said that the plan is not going forward due to opposition from the temple. Dispute continues as to the origin of the statue, with Korea insisting it was made during the Silla period in Korea.