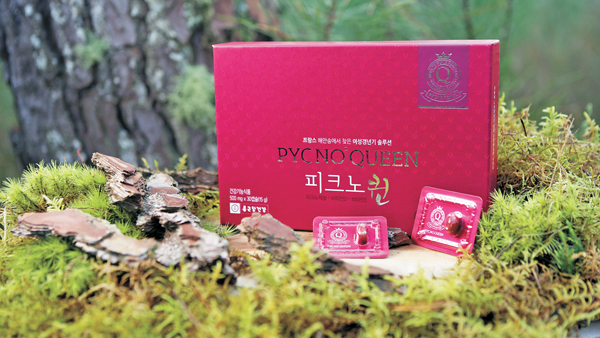 Pycno Queen, the newest in the line of functional foods by Chong Kun Dang Healthcare (CKDHC), has hit the market. The product will alleviate menopausal symptoms such as hot flashes, night sweats, mood swings and anxiety.

The main ingredient in Pycno Queen is pycnogenol, a natural plant extract from the bark of the maritime pine that grows along the coast of southwest France. Pycnogenol relieves symptoms of menopause by eradicating free radicals in the body and improving blood circulation.

In 2003, the antioxidant gained Generally Recognized as Safe (GRAS) status under the American Food and Drug Administration (FDA). It has since been used in dietary supplements, multivitamins and health products in more than 50 countries around the world.

CKDHC hired actress Jeon In-hwa to star in advertisements for Pycno Queen after surveying 400 post-menopausal women to determine the spokesmodel that would best represent beauty, health and credibility in the appropriate age range.

According to a CKDHC official, the company plans to hold various events on healthcare for post-menopausal women following the launch of its new menopause relief product.