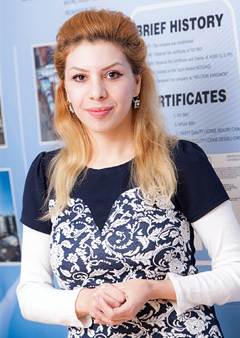 
A female engineer from Iran shattered the glass ceiling and won the hearts of her Korean colleagues in by using local dramas to teach herself to becoming accustomed to the nation’s corporate culture.

It’s been four years since Ziba Omidi, 33, came to Korea to work. After graduating from the University of Tehran, one of Iran’s top-ranking universities, she worked at Farab Company, a major national corporation in her home country, before coming to work at a medium-sized telecommunication company in Gwangju.

While she was working in Iran, a partner company from Korea offered to help her earn a masters degree in electronic engineering from Yonsei University. Omidi, despite having prepared to study in Germany, was mesmerized by Korea’s state-of-the-art technology and decided to accept the offer.

After earning approval from the Ministry of Justice, she came to Korea in 2012 and became one of the tens of thousands of foreign workers now here.

A foreigner as well as a woman, Omidi faced insurmountable barriers while working in Korea’s engineering field, which is customarily dominated by men.

“In Iran, the enrollment rate of female students in engineering schools is very high,” said Omidi. “There are lots of female engineers, as well. So I was surprised to find so few women in Korea’s engineering field.”

Omidi confronted countless situations in which she was unfairly discriminated against based on her gender and nationality. Whenever Omidi travelled to suburban factories, she was looked down upon by local workers simply for being a woman. She was once even denied access to a nuclear power plant because of her Iranian nationality.

“I think, at that time, the Korean people thought of Iran as a conservative and dangerous country,” said Omidi. “Thanks to President Park Geun-hye’s recent visit to Iran, however, that stereotype will hopefully be proven wrong.”

It wasn’t only her gender and nationality that posed difficulties for her. Language was another major barrier. As a result, during her early years in Korea, her colleagues had to accompany her wherever she went. The language barrier, however, was soon overcome thanks to Omidi’s love for Korean dramas.

“When I eat my favorite Korean dish, gamjatang [pork back-bone soup],” explained Omidi. “I can separate the meat from the bones using my hands.”

These days, Omidi is busy catching up on all the episodes of a popular Korean drama, “Misaeng (2014),” a story about newly-employed workers struggling in a company. She’s been watching the drama as a guide to help her get along in Korea’s corporate culture.

“It’s also stereotypical of people to imagine a submissive woman wearing a burka when they think of Iranian women,” said Omidi. “I will show the people that a woman from the Middle East can succeed at her career here in Korea.”