Fallen Katusas are honored for their wartime service

Fallen Katusas are honored for their wartime service 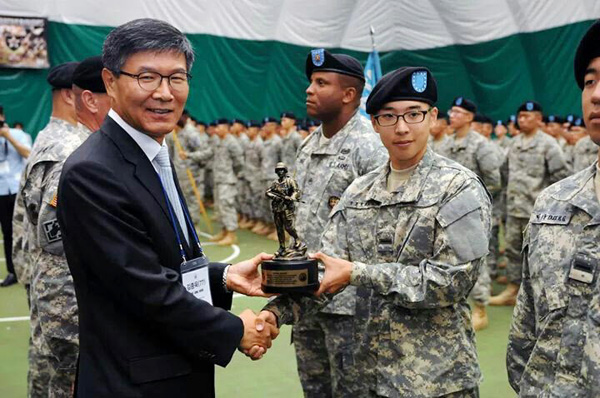 Kim Jong-wook, left, head of the Katusa Veterans Association, awards a Korean Augmentation to the U.S. Army (Katusa) soldier for his performance at a ceremony to mark the completion of a boot camp training course for Katusas at Camp Jackson in Uijeongbu, Gyeonggi, last August. [KIM JONG-WOOK]

Retired members of the Korean Augmentation to the U.S. Army (Katusa) eagerly voiced their support for the Korean War Veterans Memorial Foundation’s ceremony to honor their predecessors who were killed in the 1950-53 Korean War.

The foundation will hold a Katusa Verbal Wall of Remembrance Ceremony on June 25, in which the names of 7,097 Katusa veterans who died in the Korean War will be called.

The organization has identified the names of nearly 3,000 Katusa soldiers, which the foundation added to the initial list of 4,360 soldiers, and the names of 36,947 U.S. soldiers who died in the war will also be engraved on the 28-by-2.2-meter (92-by-7-foot) wall of remembrance.

“When the Korea JoongAng Daily [on May 19, page 6] reported the news of the Wall of Remembrance, the retired Katusa soldiers were overjoyed,” Kim Jong-wook, head of the Katusa Veterans Association.

The association’s website is already flooded with supportive messages from members looking for ways to contribute.

“It was not widely known that there were 8,000 Katusa soldiers fighting in the war,” Kim added.

Katusa Korean War veterans have previously been overlooked when Korean and U.S. veterans of the Korean War were commemorated in their respective countries. The term “Katusa” was not even coined until after the armistice was signed between North Korea and South Korea.

“Because of its ambiguous identity and lack of designation during the war, neither government stepped up to recognize them,” Kim said.

The association leader is planning to fly to Washington to conduct a meeting with officials of the foundation and discuss ways to provide support. The association is also planning to run their own fund-raiser to offer whatever support they can.

“In response to the foundation’s initiative to honor our fallen predecessors, we at the Katusa Veterans Association feel obligated to run this fund-raiser,” he said.

Kim is also planning to assemble the U.S. armed forces associations from all parts of the United States in order to form a greater affiliation.

“There are about 3.5 million U.S. soldiers who served in Korea after the Korean War. If we include family members, that number swells to nearly 10 million,” Kim said. “It wouldn’t hurt to build an alliance that can speak out against someone like, say, Donald Trump, who would shake the ties that bind these two countries.

“The Korean War Veterans Memorial Foundation’s gesture is a testament to the solid relationship between the United States and Korea,” Kim continued. “The Korean government should take this opportunity to enhance that precious relationship.”