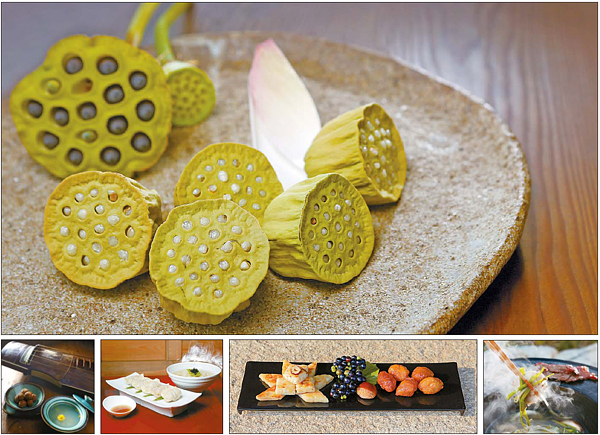 Top: The Pungseok Cultural Foundation’s Food Institute Junpyoung is reviving traditional Korean dishes, including lotus seed pod dumplings, in which the holes are filled with sole fillets. Above, From left to right: Quince cookies are made with sugar, black pepper, cinnamon and quince powder and served with chrysanthemum tea; “Gu-myeon” combines noodles made with flour and radish with aduja, or dumplings filled with duck and various seasonings; Pan-fried ginseng rice cakes served with mandugwa, which are similar to yakgwa (traditional cinnamon honey cookies) but are made like dumplings with a filling of steamed persimmons, jujubes and honey; “Ilgeoyangdeuk jeonriptu” is a dish similar to shabu-shabu (hot pot) but it uses jeonriptu, a special cast-iron pot with a wide rim for grilling meat. [PUNGSEOK CULTURAL FOUNDATION]

Bibimbap (rice mixed with vegetables and meat with spicy sauce), samgyetang (ginseng chicken soup) and galbijjim (braised short ribs) are not all there is to traditional Korean cuisine.

Lotus seed pod dumplings are also a traditional Korean food, says Kwak Mi-kyung, head of the Food Institute Junpyoung of the Pungseok Cultural Foundation, which was developed back in the Joseon Dynasty (1392-1910) by an intellectual named Pungseok Seo Yu-gu (1764-1845).

Although Seo wasn’t a renowned reformist of the Joseon Dynasty, he too deserves to be remembered as a man who dedicated himself to living a rural life, working in rice paddies and fields of his rural home after leaving the political arena, and thereby achieving great knowledge - especially in practical learning. After experiencing almost everything there is to know about farming and fishing, he compiled the “Encyclopedia of Rural Life,” which consists of 113 volumes and 54 books.

The encyclopedia features a section on food, which includes about 1,200 recipes that Seo had developed himself while living the life of a rural man. 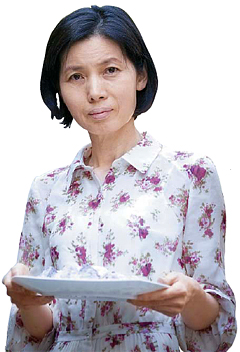 Mesmerized by all the nutritious, organic and unconventional recipes, Kwak recently published a book titled “Joseon Chef Seo Yu-gu” that introduces about 50 unique traditional Korean dishes that are certainly not available at any Korean restaurants today.

“As the teacher said, I cut off the stem of a lotus seed pod, scraped out the insides of the holes that feels like a sponge, and filled the inside with sole fillets that have been seasoned with soy sauce,” Kwak writes, describing her experience following Yeo’s recipe for making lotus seed pod dumplings. Here, “teacher” refers to Seo.

“Then I put the pods inside a small steamer, and after a while, when I opened the lid, I was astonished,” she continues. “The way the lotus seed pods were sitting in the steamer was just so beautiful and elegant.”

She explains in the book that lotus seed pods are known to be good cure for constipation and insomnia. When consuming this ingredient along with a high-protein food like sole fillet, Kwak says it becomes a brilliant nutritional dish.

The book also introduces “gu-myeon,” a noodle dish made using dough that combines radish with flour to help people who have problems digesting flour. According to Kwak, radish suppresses the gluten in flour that is known to cause indigestion.

There’s also “jeoncheoncho,” a pan-fried meat stew that mixes cheoncho, an ingredient used before chili peppers were imported during the Joseon Dynasty, with glutinous rice flour and a little bit of soy sauce.

Although he was also a leading scholar, a high-ranking official and an intellectual and philosopher in the study of Confucianism, Seo criticized the Joseon noblemen’s neo-Confucianism ideology, describing it as “a soup that’s made with dirt, rice cake that’s made with paper.”

Seo insisted it is a hollow philosophy that does not help people to live. The reason he decided to write the “Encyclopedia of Rural Life,” which is full of practical lessons, is because he wanted to help improve people’s lives, according to the Pungseok Cultural Foundation.

“I believe Seo was the man who really displayed a sense of noblesse oblige,” said Kwak, explaining that he grew up under parents who did not allow their children to throw away even a grain of rice that fell on the ground: they had to rinse it under water and eat it, as every rice grain signified the hardship of farmers.

Kwak said she first learned about Seo two years ago. Before then, she was an ordinary housewife who liked to cook and share food with her neighbors. She majored history in college, she never imagined she would end up with a career that has anything to do with cooking.

But one taste of Seo’s food changed her life, says Kwak.

“It was at a seminar that I attended two years ago at the National Folk Museum,” Kwak said. Since that day, she said she was eager to revive all the recipes developed by Seo, and she decided to meet with some people who were preparing to launch the Pungseok Cultural Foundation. That was the beginning of her journey, she recalled.

The food institute of the Pungseok Cultural Foundation opened last July in Jeonju, North Jeolla, and Kwak became the director. Since then, she says she’s been making a rough draft translation of the food section of Seo’s encyclopedia and working on restoring it, leaving herself hardly any time to sleep.

According to Kwak, there are about 1,200 recipes in the food section of the encyclopedia, known as “Jeongjoji.”

“I think Seo tried making most of the dishes before writing up all of the recipes,” she said, adding that “there are notes of his thoughts and experiences of what went well and what was good in ‘Jeongjoji’.”