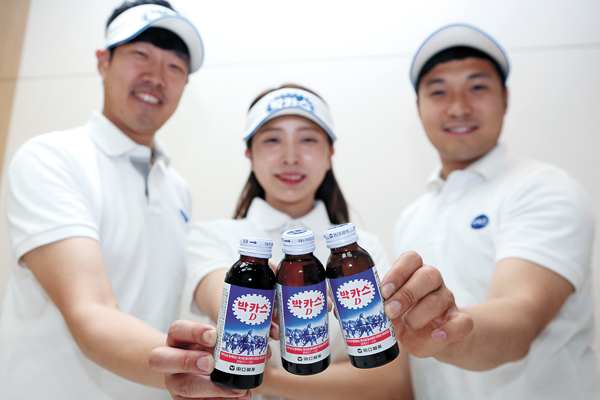 Bacchus, a brand under Dong-A Pharmaceutical, encourages young people to take on challenges.

One of the ways the company does this is through its annual Dong-A Pharmaceutical Long March through National Land, which this year begins July 1 in Busan.

The event’s opening ceremony will be held at the Busan Suyeong Bay Yachting Center.

The Dong-A Pharmaceutical Long March through National Land invites 144 university students - 72 men and 72 women - to walk for 21 days and 20 nights.

The event was established to realize a goal of Kang Shin-ho, chairman of Dong-A Socio Group, who wanted to create opportunities for young people to become mentally stronger and experience fellowship.

Over the past 18 years, 2,569 university students have joined in the walk. Participants have walked a cumulative 10,282 kilometers, equivalent to 12 round trips from Seoul to Busan.

Since its launch in 1998, the journey has represented the passionate spirit of young people and their willingness to take on new challenges.

Bacchus, one of Korea’s longest-running brands, introduced this special edition to bring that same spirit and energy to everyone, regardless of their participation in the walk. The label features last year’s participants striding toward the finish line.

“The Long March is what encouraged young people to challenge their limits and discover their ability to endure the difficult times of the International Monetary Fund crisis in 1997,” said Lee Won-Hee, the president of Dong-A Pharmaceutical.

“These days are said to be even more difficult. ‘Bacchus Special Edition’ is designed to send a message of support for young people.”

The slogan for the new edition is “Look After Yourself,” recognizing the frustrating reality for many young people today. Its commercials seek to remind young people of their value as someone’s son, daughter or companion, and cheer for them to stay strong.

Along with “Look After Yourself,” Bacchus has also been holding its “Bacchus Self-Scanner” event since the end of May.

When people put their hands on the machine’s palm-shaped sensor, it uses bio-signal analysis technology to detect things like heart rate and skin temperature, giving them a figure to indicate how “run down” they are feeling.

Those who use the machine are then given a coupon for a free Bacchus drink.

Bacchus has also been working to draw young people through a collaboration with the nation’s most popular messenger app, KakaoTalk. The company designed new characters for a “Bacchus Emoticons” pack, which it gave away for free.

The pack was downloaded 150,000 times in just five hours.