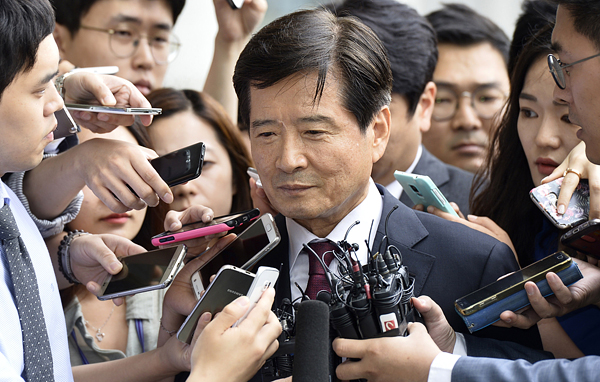 Nam Sang-tae, the former CEO of Daewoo Shipbuilding & Marine Engineering (DSME), is surrounded by reporters on Monday as he was summoned to the Seoul High Prosecutors’ Office to be questioned on his alleged involvement in the company’s accounting fraud. [OH SANG-MIN]

Prosecutors summoned Nam Sang-tae, the former CEO of Daewoo Shipbuilding & Marine Engineering (DSME), on Monday to question him on allegations of his involvement in the company’s accounting fraud and its mismanagement.

Nam, 66, appeared at the Seoul High Prosecutors’ Office to answer to accusations that he granted kickbacks to friends and was involved in accounting fraud as he served as CEO of DSME from 2006 to 2012, amid a larger ongoing probe into the troubled shipbuilding company.

The Supreme Prosecutors’ Office’s special investigation team said it is “still investigating the amount of fraudulent accounting that occurred during the time Nam was CEO,” adding that he was summoned on personal charges.

Nam evaded reporters’ questions regarding the allegations as he entered court at around 9:30 a.m., only saying, “I will fully cooperate with the prosecutors’ investigation.”

Among various allegations, Nam is suspected of giving business favors to a logistics company owned by a 65-year-old college friend surnamed Chung, leading to a loss of 12 billion won ($10.18 million) for DSME. Prosecutors say that in return Nam received shares from Chung’s foreign firm.

According to prosecutors, in October 2009, Nam ordered a subsidiary company to purchase an 80.2 percent stake in the Busan International Distribution Center (BIDC), of which Chung was a majority stakeholder at that time. The BIDC began to collect 5 to 15 percent between 2010 and 2013 in transportation fees for land and maritime contracts.

Chung was earlier arrested on June 17 for charges of embezzlement, forging of evidence and negligence.

Nam is also accused of handing out business favors to other acquaintances including architect Lee Chang-ha and giving preferential treatment to a hotel project in Oman in 2010 without consulting the board of directors, which led to tens of billions of won in losses. Lee was also said to have won a bid for a DSME building in Dangsan-dong in Yeongdeungpo District, southwestern Seoul, in a similar manner, with inflated construction costs leading to billions of dollars in profit.

On June 8, prosecutors raided the offices of DSME including its headquarters in downtown Seoul and shipyards in Geoje, South Gyeongsang, to look into the embattled shipbuilder’s alleged accounting fraud and managerial corruption.

The investigation team was searching for evidence that would prove that the shipbuilder’s management intentionally manipulated its books to gain more loans from its creditors.

The Board of Audit and Inspection earlier this month said that Korea Development Bank, the main creditor and the largest stakeholder in Daewoo Shipbuilding and Marine Engineering, failed to properly oversee and manage the shipbuilder. The BAI added that the balance sheets in 2013 and 2014 were questionable and that the shipbuilder overstated its operating profit by 1.53 trillion won and its net profit by 1.16 trillion.

Nam was expected to be questioned by prosecutors on whether he received any other kickbacks from Chung, whether he ordered the accounting fraud and whether he engaged in illegal lobbying activities involving government officials of the Lee Myung-bak administration.

Prosecutors also suspect that 5.4 trillion won in accounting fraud took place under former CEO Ko Jae-ho, 61, who helmed the company from 2012 to 2015. They will summon Ko as early as this week for questioning.