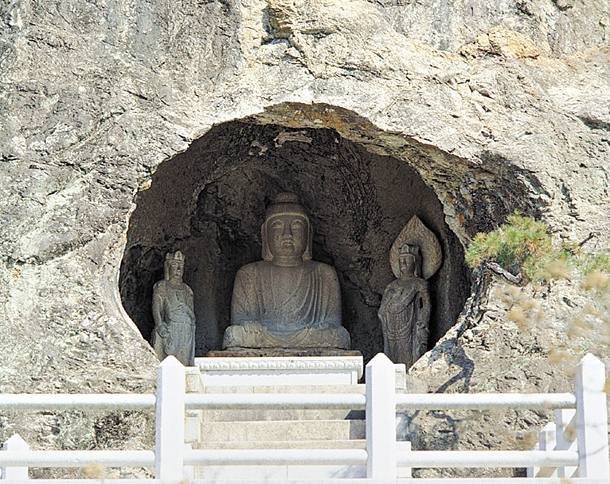 This Buddhist temple was established during the early Unified Silla period (676-935) inside a naturally formed cave in the rocky cliff of Palgong Mountain in Gunwi County, North Gyeongsang. It is regarded historically important largely because it predates the renowned Seokguram Grotto (National Treasure No. 24).

The site enshrines a stone Buddhist triad known to have been made around 700.

The principal Buddha of the triad is seated in a cross-legged position on a pedestal. It features a disproportionately large head with an usnisa (a protuberance symbolizing supreme wisdom) and stern gaze unlike other Buddha statues made in the same period, which typically wear benign, friendly smiles.

The Buddha’s gesture, with the right hand placed on the right knee with the fingers downward, shows that he is expelling evil.

The triad is regarded as historically significant because it provides a fine example of the transition of early Korean Buddhist sculpture from the Three Kingdoms to the following Unified Silla Period.