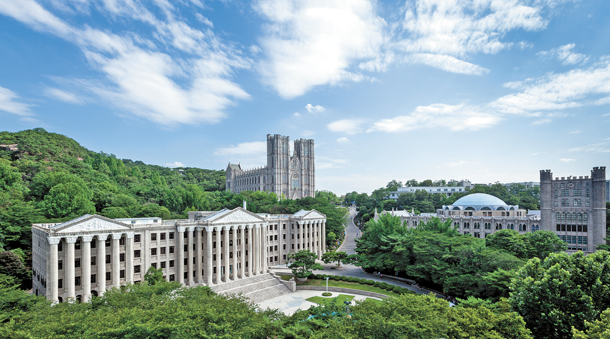 It was a wintry day in 2015 when Kim Hye-young came across an interesting survey from China. The study had asked the Chinese public which Korean university they favored the most. Kyung Hee University (KHU) topped the chart, she says.

“It was unbelievable,” recalls Kim, dean of the Office of Admission & Public Relations at Kyung Hee Cyber University (KHCU), a sister school of KHU. “Here on campus, we do have an international education institute that allows foreigners to come and learn Korean, but the competition is really fierce because there’s a set quota.”

Imagining all the students who failed to make the final cut, her heart ached. Then she saw the survey. By instinct, she knew she had come across a great opportunity.

KHCU could be the answer for the lack of supply, she thought, because the school grants admission to at least 3,000 students every year, and it shares many classes with KHU. To get in, applicants with a high school diploma must submit the results of a personality test and a statement of purpose.

The best part was that access was easy - so easy that no borders had to be crossed.

“With a click of the mouse — or nowadays, a smartphone — you’re in Kyung Hee Cyber University’s classroom. You’re learning from professors whose lectures are often shared with Kyung Hee University students,” Kim highlights, explaining what she calls the greatest virtue of KHCU.

“I knew I had to reach out to the Chinese market.”

History was made in September when KHCU accepted its first batch of Chinese students from hundreds of miles away. It was the first cyber university in Korea to ever reach such a feat, says Kim, who’s also the dean of KHCU’s Office of External Relations (International Cooperation) and a professor in the Department of Hotel & Restaurant. Her general education lectures are also provided at KHU.

A total of 42 Chinese students — all in China — officially enrolled at KHCU on Sept. 1, most of which currently work for Chinese branches of Korean companies. The Chinese students will first spend some time learning Korean language and culture. At the end, if they score a Level 3 or above on the six-level Test of Proficiency in Korean (Topik), they’ll be able to select a major and start their four-year course, run entirely in Korean.

The key difference between traditional KHCU students and the Chinese cohort is the mandatory language and cultural course requirements.

Building on the latest initiative, Kim’s goal is to fill at least 30 percent of the entire school body with students living abroad within three years. The new Chinese students will hopefully be the first of “hundreds to thousands” of more Chinese students to come.

“There’s a lot of Chinese students out there who want to learn Korean, hoping one day they could get a decent job at a Korean company,” says Kim. “But in order to work with Koreans, they have to bridge the cultural gap between the two countries first.” 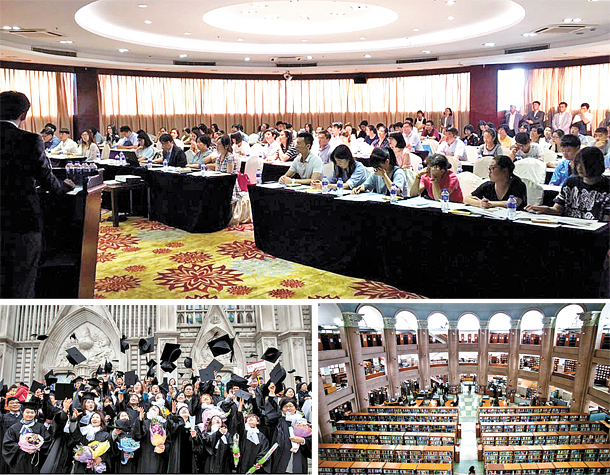 Clockwise from top: KHCU holds its first admissions briefing session in Shanghai in early August; The Kyung Hee University Library is open to all KHCU students; KHCU graduates celebrate their completion of four years of study at the school’s campus in Seoul. [KYUNG HEE CYBER UNIVERSITY]

Kim says she has witnessed many foreign students who travel all the way to Korea for a good education, only to struggle to blend into local society. Some go through financial barriers, while some get homesick. Some just lose the interest to stay focused on their academics. At KHCU, tuition is cheap. There are no hassles finding a place to temporarily stay. Korean language and culture are taught easily. One-on-one counseling is provided in Chinese so that “each and every student gets used to the online system.”

The school has 23 different majors in a wide range of fields, from NGO studies, hotel management, counseling, global management to Korean language and culture, American studies, and more. The mandatory Korean language and culture course Chinese students have to take before deciding their major helps them train themselves to later work in the Korean job force, stresses Kim.

Moreover, those who wish to put their cultural and academic lessons into practice can do so in their senior year through an internship at one of the 13 Chinese branches of Posco Daewoo.

“The competition - I can only image - will be tremendous,” says Kim. “The company will probably hire less than 10 students each year through their own hiring process.” Whoever gets in will learn the basics of the trade business during the course of their internship.

In their junior year, Chinese students who wish to study in Korea are allowed to apply for KHU’s transfer admission procedure. If they qualify, they’ll spend their last two years of college in Korea.

In case anyone is interested in short-term visits, Kim says the cyber school plans to offer three- or four-day trips around Korea. The program’s graduation ceremony will be held on KHU’s main campus in Dongdaemun District, eastern Seoul, and all the Chinese graduates will be invited.

In a world intertwined with electronics, Kim believes the skill set to wisely use computers and smartphones has never been more of a necessity, and is in high demand. Studying at KHCU will enable students to learn from the basics because they’re constantly studying via electronic device, submitting all of their projects and homework online.

It’s impossible for any student to slack off or even imagine submitting their homework through a ghostwriter because, according to Kim, KHCU’s system doesn’t allow that.

“Sometimes, we make them submit their assignments in the form of voice or video recording.”

The end result is priceless, she says. “They become information and communications technology (ICT) experts.”

When the university held a presentation in China on Aug. 10 and 11 in order to explain admissions procedures, nearly 250 people showed up, mostly between 20 and 40 years old. Teens who graduated from high school came with their parents, searching for a way to get in touch with Korea.

The most frequent question she received was how to get a job in Korea and what they need to major in order to fulfill that dream.

“I told them, ‘Study Korean and English. Then major in a business-related field.’”

The presentation was the first time KHCU had ever held a briefing session in China. The result was a “great success,” claims Kim, because her target audience showed interest, something she was convinced no other cyber university achieved. No other Korean cyber university has held a presentation in China regarding their admissions processes, she claims.

Kim recalls the Chinese audience wanting assurance that they’ll be employed at a Korean company once they graduate. Kim couldn’t make any fake promises, but what she could guarantee was “Kyung Hee’s finest education in the most convenient setting.”

KHU is 67 years old. KHCU is 15 years old, the oldest cyber university in Korea. The two schools have about 300,000 alumni and 70,000 students thriving across the globe.