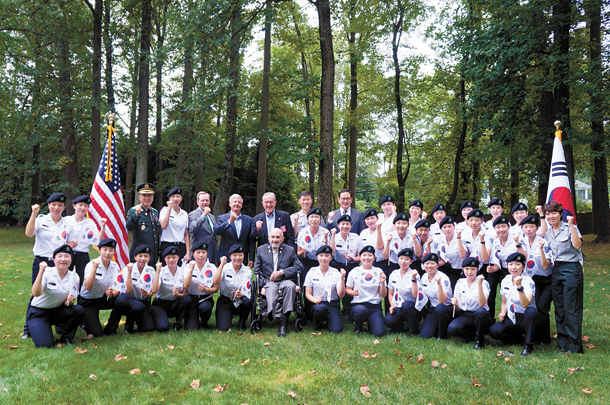 From Aug. 28 to Sept. 5, the ROTC cadets of SWU visited the United Nations headquarters and the U.S. Military Academy in New York, followed by the Pentagon and the U.S. Holocaust Memorial Museum located in Washington D.C.

Before participating in volunteer activities, the cadets held a meeting with Korean War veterans and attended a reception hosted by the defense attache of the Embassy of South Korea in Washington, D.C. At the reception, former officials of the U.S. Forces Korea (USFK) such as Gen. Walter L. Sharp, who formerly served as the USFK commander and Bernard S. Champoux, a former Eighth U.S. Army commander, were in attendance. Afterwards, the cadets visited Mary Baldwin University, a partner university of SWU, and held a meeting with their ROTC cadets.

As members of the Sungshin Change Volunteer Group, the cadets visited the Warrior House located in Washington D.C. on Sept. 3 and met up with more than 100 Korean War veterans to have lunch, play games, enjoy refreshments and watch a video prepared beforehand to thank the veterans for fighting in the war. The cadets and the Korean War veterans also visited The Korean War Veterans Memorial and Arlington National Cemetery the next day to lay flowers and clean up the cemetery.

When asked of the Battle of Incheon and the Battle of Chosin Reservoir, Albert Meringolo, 87 years old, recalled his memories of serving as a Marine during his talk with the cadets. “About 100,000 North Koreans pleaded with us to save them during the fierce battle while the temperature was below 30 degrees Fahrenheit,” Meringolo said. “We fiercely battled for the freedom of Korea. I hope that people are reminded that this freedom we have is not free.” During the battle, he and his fellow Marines blocked the way of the communist Chinese army from advancing south for two weeks, making it possible for the 100,000 civilians to evacuate from Hungnam, North Korea.