A difficult journey to create a map for all: Cartographer Ko San Ja’s quest makes for beautifully shot film

A difficult journey to create a map for all: Cartographer Ko San Ja’s quest makes for beautifully shot film 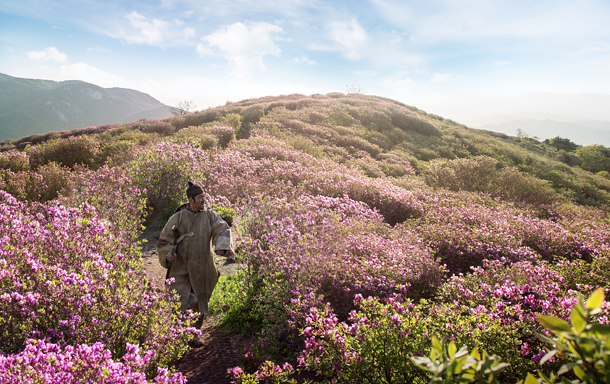 Kim Jeong-ho from “The Map Against the World” travels throughout Korea, including Mt. Hwangmae of Hapcheon County, South Gyeongsang, to draw a precise map. [CJ E&M]

The novel “Ko San Ja” written by Park Bum-shin was so memorable for director Kang Woo-suk that he couldn’t get it off his mind for weeks. He spent two months recalling the story in his head, and then finally decided to bring the novel to the big screen, knowing that he would “very much regret” not doing so.

“The Map Against the World,” which hit theaters on Wednesday, tells the story of Korean geographer and cartographer Kim Jeong-ho from the Joseon Dynasty (1392-1910). Commonly referred to by his pen name Ko San Ja, Kim is best-known to Koreans as the creator of the Daedongyeojido, a 19th-century map of the Korean Peninsula.

Since not much information regarding the historical figure has been recorded, likely due to his low social status, the movie was based on the novel with some parts interpreted through the director’s imagination. 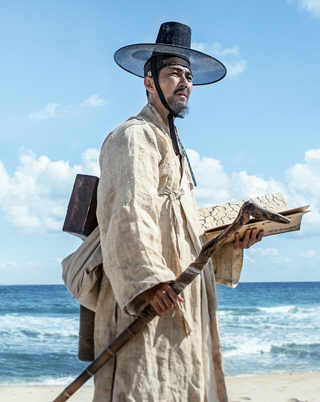 Kim Jeong-ho, starred by Cha Seung-won in “The Map Against the World.” [CJ E&M]

Although the novel and the movie are based on the same character, the two focus on different aspects of Kim. While the former features Kim’s craftsmanship, the movie concentrates more on Kim’s warmth and consideration. By putting Kim’s humane qualities at the forefront, the director wished to deliver a sense of comfort to modern people that are living busy lives.

“What I believed I should accomplish in the movie was to show the audience a character that comforts and supports others despite his own difficulty in life,” said Kang at a press event for the film held at the Wangsimni CGV in eastern Seoul last week.

The film stars Cha Seung-won, who plays Kim, and it traces the life of the cartographer, who journeys around the nation on a quest to create the most elaborate map of the time.

“For an actor playing a historical figure, there is always more to lose than to gain,” said Cha. “This is because no matter how hard an actor tries, it is not easy to depict the impact of a historical figure accurately. However, I did my best to portray the humane qualities of Kim Jeong-ho, who is an inviolable figure [for his achievement].”

The film portrays Kim as a character that works hard to achieve his dream, which is to make a proper map so that no one, regardless of social status, can get lost in the mountainous country because they have no means of accurate navigation.

In those days, maps were what travelers relied on, and an incorrect map often got people lost in the dark, even leading to death in some cases. At the time, map creation was controlled by the ruling class.

Kim travels throughout the country to draw the outlines of maps in the hope of creating precise maps that he can widely distribute. The outlines get put on to woodblocks which are used to mass produce maps with a simple stamp onto paper.

When Kim has almost completed all of his woodblocks, he is confronted multiple times by powerful authorities who tell him to hand over his work “for the sake of national security.” 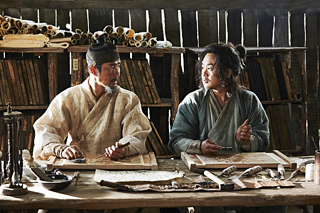 Those authorities are Heungseon Daewongun (1820-98), the father of the last king of the Joseon Dynasty Gojong, and the Kim clan of Andong, who fiercely compete against each other for political dominance. Each secretly desired sole possession of Kim’s map to better understand the nation’s distribution routes, only to be turned away.

Although historical records of these political giants trying to take away Kim’s map don’t exist, their appearances in the film stress how protective Kim is of his mission to create maps to share with the general public.

Despite the hardship Kim faces by being in the center of a political battle between two powerful groups, the man continuously pursues his dream to complete the Daedongyeojido because it “makes his heart beat.”

The flick features remarkable shots of Korean scenery that the filmmaker emphasizes “are not computer graphics.” Some of the breathtaking scenes include shots of Cheonji, the highest crater lake at Mount Baekdu and Mount Hwangmae located in Hapcheon County, South Gyeongsang.

While period films are often perceived to be too serious by some, this movie contains bits of humor to make the audience laugh lightly throughout.

The film is rated for all.