Left: Swiss-French stop-motion film “My Life as a Courgette” (2016) is a contender for Best Feature. Right: Hollywood animated feature “Kubo and the Two Strings” (2016) starring Matthew McConaughey will screen as the opening film of the festival [BUCHEON INTERNATIONAL ANIMATION FESTIVAL]

The Bucheon International Animation Festival (BIAF2016) has returned for its 18th year. The competition is bigger and the prize pool is much larger as well, according to the organizers. Talent from all over the world, including competitors from renowned animation hubs of Japan, Canada and France will gather for five days starting October 21 to decide which production will be deemed the best.

The competition is all in good fun, however. When the organizers gathered on Wednesday to hold a press conference at the Korea Press Center near Gyeongbok Palace in central Seoul, they expressed their true purpose for holding the festival. Chairman of the Organizing Committee, Jang Dong-yeul said that, with this festival, he wants to improve public awareness of animated films so that students in the field and lesser known artists have more opportunities.

This year’s theme is “Ani+Play,” a combination of the words animation and play.

The festival includes not only competition but also seminars and educational programs for budding animators. 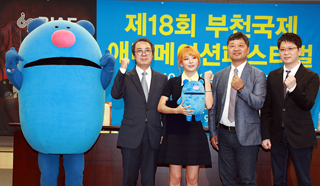 The Feature Film category is the most highly anticipated with seven heavy-hitting contenders. The judges table includes French graphic novel veteran, Benjamin Legrand, among others. Fans may recognize him as the writer of the second part of the original graphic novel version of “Snowpiercer” before it was adapted to film by Korean director Bong Joon-ho.

Among the features in the category is “My Life as a Courgette” (2016). The film is a charming stop-motion feature from Director Claude Barras in a joint Swiss-French production. It premiered at the Cannes Film Festival’s Directors Fortnight, where it received a positive reception.

It could appeal to audiences exhausted from the eye strain experienced after being exposed to computer generated images, the now-common characteristic of modern animated features.

The film won the Audience Award and the Crystal Award for Best Feature Film at the Annecy International Animated Film Festival, and was praised for its storytelling and solid soundtrack.

The film seems to appeal to a wide audience, although it may be more relatable to older audiences with its bittersweet themes of loss and self-discovery.

At the other end of the spectrum is the Japanese animated film “Your Name” (2016), directed by Shinkai Makoto. This anime film, which was released in Japan on Aug. 26, took the top spot at the county’s box office in its opening week.

It features crystal-clear visuals and photo-realistic backgrounds weaved in a romantic tale laden with fantasy elements, characteristic of Shinkai’s style.

In the wake of the retirement of Hayao Miyazaki, the world renowned director responsible for the Academy Award-winning film “Spirited Away” (2001), anime fans worldwide are desperately looking for his successor, with Shinkai’s name high up on that list. The film has been touted by critics as Shinkai’s best work yet, and is looking to be a major candidate for best feature film in the category.

The festival will conduct the judging for the Short Films category simultaneously, and has invited some of the most successful shorts created this year.

Shorts are typically an opportunity for the artists to explore aesthetic experiments and pursue visual spectacles, or share an idea or plot that will leave a long-lasting impression on the viewer. “The Blind Vaysha” by award winning animator Theodor Ushev, for example, is a stylistic experiment itself, and will likely awe judges with its incredibly detailed hand-drawn piece.

The Asia Animation Forum (AAF2016) will be back for its fourth consecutive year at the festival. This series of programs titled “Animation + Collective of Imagination” is looking to provide educational seminars and advanced technological techniques to apply in animation. The forum will invite specialized professors and researchers from all around the world to introduce new topics and give demonstrations.

The first day, for example, will delve into subjects such as storytelling techniques in shorts. As the day progresses, the seminar will conclude with discussions of rather advanced filmmaking theory. The topics are varied, even including a discussion of virtual reality, and there is bound to be a subject for anyone interested in stepping foot into the field.

“I have enjoyed animation films and drawing with my friends ever since I was young,” she said. “From watching others working in the field, I can understand just how difficult the process is. It was an honor for me when I was offered this position. I hope I do a good job. Thank you.”