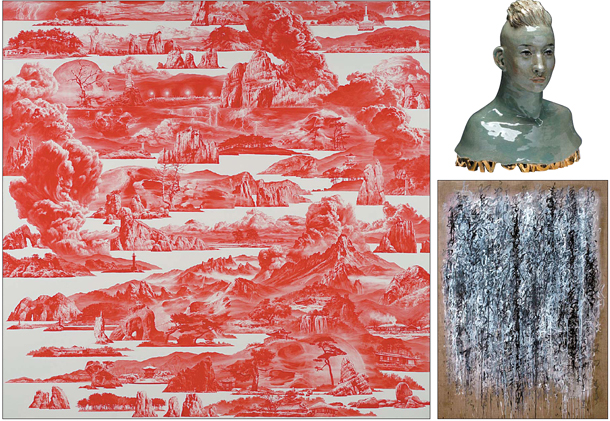 Clockwise from above: The “Between Red” series by Lee Sea-hyun; “Youth” by Lee Ha-rin; “Virtue714” by Codi Choi [KANSONG ART AND CULTURE FOUNDATION]

Korea’s legendary collector Chun Hyeong-pil (1906-62) was all about ancient art.

Chun, whose pen name was Kansong, dedicated his life and fortune to buying and preserving the country’s treasures during the Japanese colonization of Korea (1910-45) so that they didn’t get in the hands of the Japanese and end up outside of their homeland.

An interesting contemporary art exhibition is currently underway, which is in fact an homage to Chun as this year marks the 110th anniversary of his birth.

Creative and powerful pieces by both established and emerging artists commemorate Chun, his life and his remarkable collection, and imagining what Chun’s reaction would’ve been if he were surrounded by all the conceptual, installation and pop artworks is added fun. 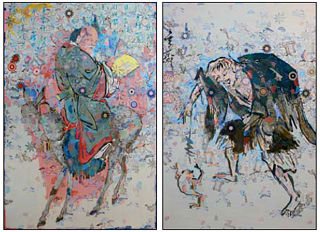 The show, with the long title “OLD & NEW: Yesterday is the discipline through which we advance - Homage to Kansong,” is in fact the first-ever exhibition that centers on contemporary art organized by the Kansong Art and Culture Foundation.

In recent years, the formerly reclusive Kansong Art Museum has been attempting to promote its name to the greater public by establishing the foundation and holding a series of public-friendly exhibitions outside the museum and at the trendy Dongdaemun Design Plaza (DDP) in central Seoul.

“My grandfather’s philosophy was to protect the country through culture,” Chun In-keon, the foundation’s chief administrative officer and the collector’s grandson, told reporters at a press event on Sept. 9. “That, I believe, is something that is relevant to Korean society today.”

In fact, one of the elder Chun’s famous quotes is, “The thing that makes a piece of artwork precious is its reflection of the period and the culture in such an honest and smart way. … Only the best of the best do just that.”

Lee Jin-myung, who curated the exhibition, said that the 100-year history of Korean contemporary art began through the West’s impressionism which was introduced during the Japanese colonization.

Why is that? This is where the idea for the exhibition began, Lee said.

“[We wanted to] delve into just what Korean aesthetics are,” he said. “Korea endured a ‘cultural rape,’ in which imperialists looted the country’s cultural heritage items. But throughout the years, Korean artists, with their unique aesthetics, produced masterpieces. The show examines what were the roots, energy and inspiration for their works.”

Lee added that Chun Hyeong-pil, more than anybody else, knew the importance of knowing who we are.

Although Chun wasn’t one of them, what he’s done to keep Korean treasures in the country, some say, was his way of fighting for independence.

Lee says he selected artists who, first of all, question who they are through their work and second, examine contemporary Korean society and cultural legacies from the past. The result is a list of artists that include some of the most recognized names in the country’s contemporary art scene today, like Lee Sea-hyun, Lee Lee-nam, Cody Choi, Lee Chang-won and Ryu Bi-ho.

Cody Choi, in his “Virtue714,” writes Myeongsimbogam - a collection of wise sayings by sages that dates to the Goryeo period (918-1392) - over and over on top of one layer after another. Whereas Myeongsimbogam is originally intended to brighten and purify one’s mind and inner self, the continuous writing eventually darkens the canvas and confuses the viewers.

The piece can be interpreted as a reflection of the present state of Korea and Koreans, Lee commented.

A landscape painting by Lee Sea-hyun, also on display, is not a traditional Western landscape painting that strictly follows the command of perspective, but rather shows clear influence of the works of Jeong Seon, the landscape master of Korea’s Joseon Dynasty (1392-1910), whose works are part of Kansong’s collection.

In fact, two of Jeong Seon’s landscape paintings that are part of Kansong’s collection are also on display at the exhibition for reference. It’s known that Chun was particularly fond of Jeong Seon’s artworks.

Contemporary potters, on the other hand, showed their own interpretations of the porcelain pieces from Joseon and celadon art from the Goryeo Dynasty, another favored item of Chun.

There are also pieces that pay tribute to Chun. In his installation piece, “Memories of Kansong,” Lee Chang-won uses traditional mirrors to reflect on the wall the images of Kansong and his collections, creating a piece that plays with light and darkness. Pop artists also illustrated the faces of Chun in a more direct homage.

“Seeing how these 33 artists commemorate and praise Korean culture,” Lee says “is a fun way to experience contemporary art.”