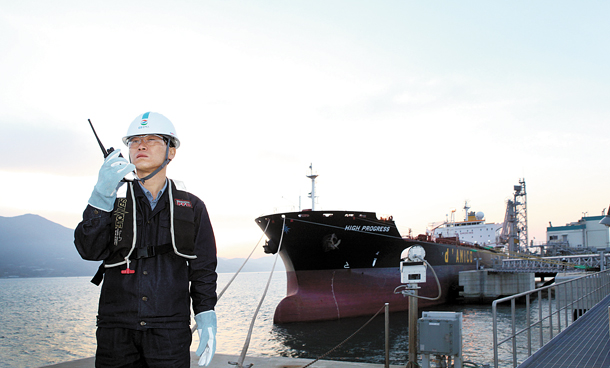 An oil tanker operated by GS Caltex heads to sea carrying oil for export. The company’s exports account for two-thirds of its total sales. [GS Caltex]

Since its establishment as the nation’s first private oil corporation in May 1967, GS Caltex has been supplying one third of domestic petroleum energy through its globally competitive oil production facilities.

The company has also entered the global market, and its exports account for two-thirds of its total sales.

In 2002, it was 26 percent.
As the world has become more aware of environmental issues, GS Caltex has expanded its Heavy Oil Upgrading (HOU) facilities, increasing the output of eco-friendly products and contributing to the national economy by exporting them overseas.

Starting with the construction of the Residue Fluid Catalytic Cracking Unit in 1995, GS Caltex has invested over 5 trillion won ($4.4 billion) since 2004 to establish facilities with advanced technology such as a hydrocracker in 2007, a vacuum residue hydrocracker in 2010, and a vacuum gas oil fluidized catalytic cracking unit in 2013, finalizing their plan to create a “perfect complex.”

As a result, GS Caltex now processes 274,000 barrels of oil a day, the largest amount of any oil company in Korea.

In addition, GS Caltex has established a corporation in Singapore as well as local offices in London and Abu Dhabi to secure its exports of high-quality petroleum overseas. The company now provides 80 varieties of crude oil to 30 countries across Southeast Asia, Australia, Europe, Latin America, Africa and the Middle East.

GS Caltex is also currently exporting its petrochemical products, mainly to China and other Asian countries. The company has been investing in the petrochemical industry to establish its competitiveness overseas.

GS Caltex’s polypropylene business, which started off with the annual capacity of producing 120,000 tons in 1988, has been enlarged to produce 180,000 tons a year in 1989. To supply high-quality polypropylene products to domestic and overseas regions, the company established a Chinese corporation in Langfang, Hebei province in 2006 and Suzhou in 2010 to enter the Chinese petrochemical market. In 2011, GS Caltex incorporated its company in the Czech Republic as well, advancing into the composite resin market in Europe.

The company recently established a branch in Mexico, paving the way for the North American market. The manufacturing facility will start operations in 2017. With this, GS Caltex plans to become a global composite resin manufacturing company.

Through constant investment in its infrastructure and production capacity, GS Caltex is heading towards its vision of being the “Value No. 1 Energy & Chemical Partner” in the global market.