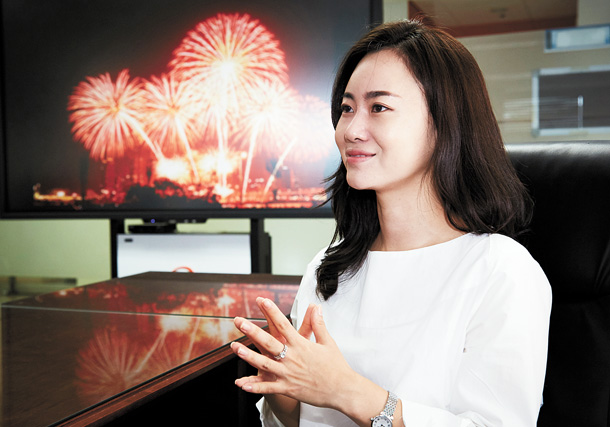 “Unlike its appearance, the firework-making process is far from glamorous,” said Yoon Doo-yeon, the fireworks designer for the Seoul International Fireworks Festival. [HANWHA GROUP]

The Seoul International Fireworks Festival is scheduled to color the night sky on Saturday, and the artist in charge of the show is Yoon Doo-yeon, a designer at Hanwha Group’s fireworks promotion team, which has hosted the event every year since 2000.

As a fireworks designer, her job starts by developing the festival’s concept and designing each firework that will be shot into the sky. Selecting and editing the music to be played during the event is also part of the job, as well as pacing it to match the fireworks.

Yoon has been in charge of the design for the Seoul International Fireworks Festival since 2012.

“My job is somewhat similar to that of a musical director who has to handle multiple realms of art,” she said. “It’s definitely rewarding, though, to think that my work will be enjoyed by over one million people.”

Celebrating its 14th anniversary this year, the Seoul International Fireworks Festival is an hour-long show held over the Han River, during which Korean, Japanese and Spanish teams present over 100,000 fireworks.

Yoon is in charge of the Korean team; she labels each spark and specifies in detail when and how it will explode.

Firework scenarios, for example, are written in forms such as: “Three units of No. 10 six-inch smile fireworks to be fired at 1 minute 28 seconds and shown at 1 minute 32 seconds.”

This year’s theme is “magic” - the story of a magician who comes to visit a village and presents fireworks, which the villagers have never seen before.

“The plan is to combine fireworks with narration, video and special effects to tell a story,” she said.

Although fireworks last for only a few seconds, the process of making them takes much longer.

Fireworks are shot into the sky in round pockets stuffed with chemical compounds.

Each pocket is filled in by hand according to the shape it is designed to create.

For example, if the designer wants to make a smiley face, he or she has to place a mixture of sodium with many other chemical compounds in that exact shape, then carefully wrap it in paper along with a fuse, gunpowder and a propellant.

“Because fireworks can cost up to one million won [$896] per shot, practice runs are impossible. All we can do is repeatedly check before the show starts,” said Yoon.

After graduating from the College of Arts at Hongik University, Yoon joined Hanwha Group in 2009. Since then, every year, she has designed over 40 to 50 fireworks presented at the Seoul International Fireworks Festival. She barely gets to enjoy days off, even during the summer holiday season or year-end period.

“I used to go on business trips 50 times a year outside Seoul. I remember there was one time my credit card record was full of lodging expenses,” she said.

Her pants were frequently burnt from handling gunpowder, and during one Busan Fireworks Festival, she even fell into the sea while shooting fireworks from a boat amid a storm.

“My motivation to work still comes from seeing people enjoy the show,” she said. “That’s why I want to continue doing this job.”

“Abroad, fireworks are considered not just a festival event, but a proper cultural product,” said Yoon.

She adds, “It is my dream to export Korean fireworks in its comprehensive artistic form combined with video, lights and lasers.”