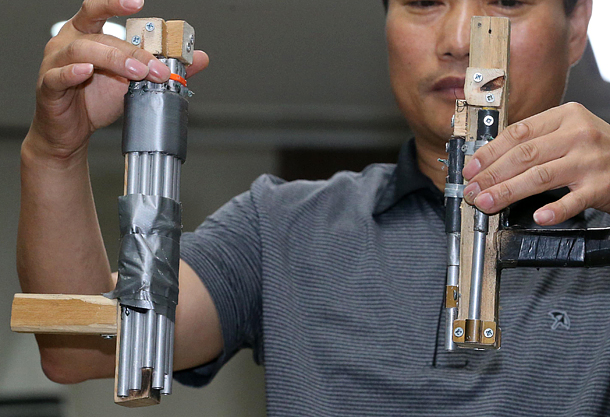 The ex-convict was wearing a type of bullet-proof vest and helmet and had with him 16 more homemade guns, a bomb and seven knives.

The suspect facing a murder charge, Seong Byung-dae, 46, was wearing an electronic tracking device on his ankle when he started attacking people near Opaesan Tunnel in Beon-dong. He had a record of prison sentences for sexual assaults.

Seong allegedly shot at an acquaintance who runs a real estate agency with a homemade gun and missed him, although a passerby was hit. Seong then bludgeoned the acquaintance outside his office with a hammer. Both victims are hospitalized but their lives are not in danger.

The Gangbuk Police Precinct received a call saying a person was attacked and dispatched Lieutenant Kim Chang-ho and his partner to the scene. They arrived at around 6:30 p.m. Backup arrived shortly later.

Seong was hiding among bushes. He had managed to remove his electronic monitoring device and discard it. He allegedly shot at Kim as he approached.

Neither Kim nor his partner were wearing bullet-proof vests, as the call to the station merely said a man was injured. The bullet hit Kim’s left shoulder. He received CPR and was transported to a hospital but was pronounced dead around 7:40 p.m. According to the hospital staff, the bullet critically damaged his lungs.

After Kim was hit, police officers shot at Seong with one blank and three live bullets. Seong was wearing a bullet-proof vest used in BB-gun games, commonly called survival games in Korea and Japan, and a helmet. He was hit on his left wrist and stomach, according to police.

Seong was arrested after a short scuffle with the officers and three civilians who assisted in his capture, according to police. His wounds were treated at a hospital.

The guns were fairly primitive: metal pipes were attached to wooden blocks, with one end blocked with a gunpowder-like material and a wick. When they are lit, metal balls shoot out. Seong told police he found directions online to make the weapons. Police found evidence that Seong manufactured them at his home when they searched it on Thursday.

“I will be in a conflict with police in the next two to three days,” Seong wrote on his Facebook page on Oct. 11. “My goal is to kill as many police officers as I can before I die.”

In his posts, Seong mentioned several recent sensational murder cases, including one in which a woman’s body was found in her boyfriend’s freezer in Uijeongbu, Gyeonggi, in July. He wrote, “Police will try to charge me falsely with murder by putting a corpse in my room.”

When he was caught, Seong told police, “I did this as a suicide attempt.”

“We don’t know if he had a mental problem,” said Seong’s cousin. “But he was jobless and isolated from his family. We were always worried about him.”