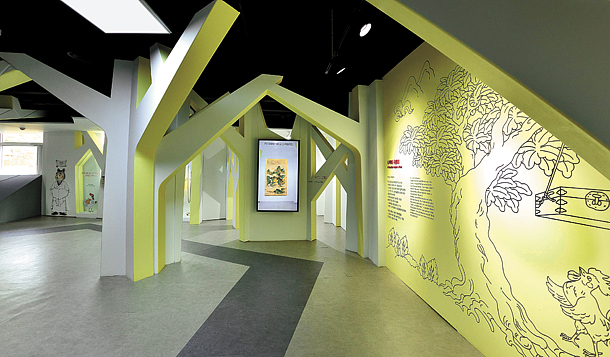 The Children’s Museum of National Folk Museum of Korea is holding an exhibition on animals that appear in Korean myths. The exhibition is designed so children can learn through activity, with few relics on display. [NATIONAL FOLK MUSEUM OF KOREA]

Animals’ names and the sounds they make are some of a baby’s first recognizable words. Many toys are shaped like animals. Zoos are one of children’s favorite places.

The Children’s Museum of the National Folk Museum of Korea is holding an exhibition on animals that appear in Korean mythology. They include a horse that flies; a bear that transforms into a human; a dragon that shuttles between the human world and an underwater palace.

“People today are familiar with Western mythology, like Greek myths, but not much with Korean mythology,” Cheon Jin-gi, the museum’s director, told reporters at a recent press event. “In our history as well there is a rich world of mythology. The exhibition is designed to help children learn Korean mythology through animals, something that children find friendly and feel close to.”

The figurine of an imaginary, sacred horse (left) as well as a woodblock depiction of the birth of Kim Al-ji, the progenitor of the Gyeongju Kim clan (right). [NATIONAL FOLK MUSEUM OF KOREA]

The exhibition consists of five “villages,” each dedicated to an animal from famous Korean myths of how a king was born and how he founded an ancient Korean kingdom.

In a section about horses - which appears in a myth about how Park Hyeokgeose, the founding monarch of Korea’s Silla Dynasty (57 B.C.-A.D. 935) - the walls have large white eggs and when visitors touch them their colors change to purple. In the myth, a white horse is found bowing near a well. The horse flies away and there appears a purple egg, from which Park was born.

The part about roosters is related to the myth about Kim Al-ji, who is known to be the progenitor of the Gyeongju Kim clan who ruled Silla for the most part. In this part, organizers have recreated a treasure box filled with marbles. In the myth, a treasure box was found on a tree and a rooster crows. Kim was found in the box as a baby.

The section about bears is perhaps the most exciting of all for children, as it’s designed like a cave with a maze. Children can also rock-climb. A bear appears in the myth about Dangun, or the founder of Gojoseon, Korea’s first kingdom. It’s told that a bear lived in a cave eating mugwort and garlic to become a human. The bear becomes a woman and births a son, Dangun.

The part about tigers and dragons are both related to myths about Taejo, the founder of Goryeo (918-1392). They also have fun activities like a ball pit and a game of darts.

The exhibition is designed so that children can learn through activity. Visitors, for instance, must turn a handle to bring down the treasure box filled with marbles from a tree. When they do that, a series of chains go around - like the inside of a clock - and the box slowly comes down.

But there are a few relics on display as well. They include: a figurine of an imaginary, sacred horse known as Guksimal; a woodblock from the late Joseon Dynasty (1392-1910) period that illustrates the birth of Kim Al-ji; a landscape painting by Jo Sok (1595-1668) that depicts the same myth with a treasure box in a tree; as well as norigae (an accessory that was hung on women’s traditional tops) that is made with a tiger’s claw.

Outdoor activities are available, as well. The officials have improved the outdoor playground to better illustrate the theme of the five animals. They also plan to collaborate with zoos to introduce programs where children can learn about how the animals are portrayed in myths and also actually visit the zoos to meet them in person, officials added.