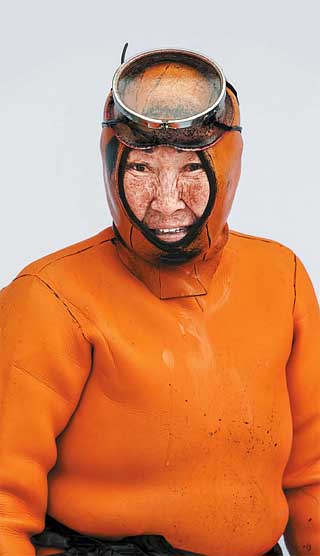 Kim Jul-ja, a female diver of Jeju, photographed by Kim Hyung-sun. The unique culture of the divers, called haenyeo, has been added to Unesco’s list of Intangible Cultural Heritage of Humanity. [NATIONAL INTANGIBLE HERITAGE CENTER]

For as long as Koreans can remember, the female divers on Jeju island, or haenyeo, have been nicknamed “Eomeong of the Sea.”

And it’s exactly the perseverance a mother displays for her family that helped the unique culture of haenyeo become a new addition to the Unesco’s list of Intangible Cultural Heritage of Humanity.

At an exhibition on haenyeo underway at the National Intangible Heritage Center in Jeonju, North Jeolla, items on display like a sturdy black rubber diving suit and surprisingly simple-looking tools like a stick and a net attest to the strength of these women.

Jeju haenyeo have dived on the coldest days and even shortly after giving birth, so that they could support their family. They also harvest marine products without relying on any air tanks or other breathing equipment.

The exhibition, titled “Culture of Jeju haenyeo,” is a place to learn all about these women and their place in Korean history. About 100 articles are on display, including rare historical documents.

“Jamyeoseol (Tale of Diving Women),” is one of them. The essay scholar Kim Chun-taek (1670-1717) wrote while he was in exile in Jeju says that Jeju’s female divers who expose their arms and legs and go about their business with no shame were quite a culture shock to the conservative scholars of the Joseon Dynasty (1392-1910). 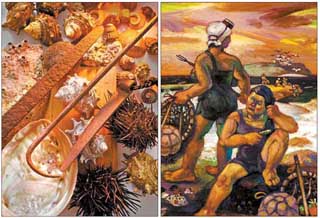 As the number of haenyeo increased, it seemed the Jeju sea just wasn’t big enough. Newspaper and magazine articles during the Japanese colonization of Korea (1910-45), also on display, show that haenyeo would harvest marine products in waters outside Jeju - in Busan, Ulsan and even in Japan, China and Russia.

The exhibition also displays several photographs of haenyeo. In fact, photographs played an important role in informing the world about these women.

Photographer Joon Choi has shot photos of the divers since 2013 and he held an exhibition titled “Mother in the Sea, haenyeo” at the Unesco headquarters in Paris in April 2015. National Geographic photographer Y. Zin has also been shooting haenyeo in hopes of helping preserve their culture. The project is dubbed “Happy Haenyeo Project.” 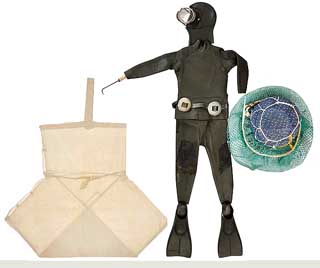 Left: A piece of clothing worn by haenyeo while diving Right: Diving suit and a net used by An Do-in (1926-2004), a Jeju haenyeo[NATIONAL INTANGIBLE HERITAGE CENTER]

Critics say that of the art inspired by the culture of haenyeo, the photos have helped the most in raising awareness of Jeju haenyeo.

“The culture of Jeju and their unique values have inspired artists in various fields,” Son Myeong-hee of the center’s intangible cultural heritage promotion division said.

“The exhibition displays paintings by artists like Chang Ree-suok as well as works by photographers Kim Hung-ku, Kim Hyung-sun and Kim Da-un who spent years with haenyeo so they could convey their life through their lenses.”


*The “Culture of Jeju Haenyeo” exhibition runs until March 31 at the special exhibition gallery of the National Intangible Heritage Center in Jeonju, North Jeolla. Admission is free. The center closes on Mondays and Jan 1. For more information, call 063-280-1500 or visit www.nihc.go.kr.