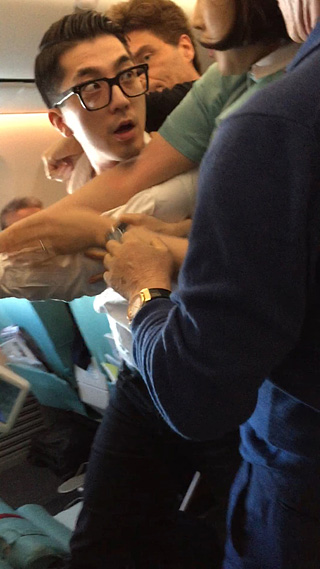 American pop singer Richard Marx posts a photo of an intoxicated business-class passenger who attacked passengers and crew Tuesday aboard a Korean Air flight from Hanoi to Seoul. [FACEBOOK]

An intoxicated passenger caused a row on a Korean Airlines (KAL) flight to Seoul, only to be restrained by American pop singer Richard Marx, who stepped in to subdue the violent man and posted about the fiasco over social media.

The drunken passenger, a 34-year-old Korean man surnamed Yim, was aboard the business class on Flight 480 from Hanoi to Seoul, when he started to hit and kick passengers and flight attendants. He was taken into the custody of Incheon International Airport Police immediately after arrival.

Police said Yim works in his father’s trading company and was returning from a business trip in Vietnam. Yim was said to have been drinking before boarding the plane and had two glasses of liquor in-flight.

The KAL flight took off from Hanoi at 2:40 p.m. and arrived at Incheon International Airport at 6:35 p.m. local time.

Yim is accused of striking another prestige class passenger, a 56-year-old surnamed Jang, in the face. He is also accused of verbally assaulting the 36-year-old chief steward of the flight, Park, and two other female flight attendants as well as a technician, and kicking some of them in the face or shin.

Marx and his wife, Daisy Fuentes, a 50-year-old former MTV VJ, were seated in the next row and captured the havoc that unfolded in a series of posts and photos shared over social media, including Facebook and Twitter. The pop star stepped in to subdue the passenger and later posted over Twitter: “Passenger next to us attacked passengers and crew. Crew completely ill trained.”

Fuentes also posted over Instagram, with photos of the altercation, writing that the passenger “started pushing the female staff and pulling them by the hair.” She added that her husband “was the first to help subdue him,” and that she felt “horrible for the abuse the staff had to endure but no one was prepared for this. They never fully got control of him.”

She said the flight crew did not know how to use the taser and that the passenger got loose of the rope restraints three times over the course of the four-hour ordeal. A passenger surnamed Jang later testified to the police, “I was watching a movie but Yim, who was sitting beside me, continued to try to talk to me. When I did not respond, his hand came flying my way. I was able to dodge once, but the second time around, the back of his hand struck my face.”

The flight attendants tried to restrain Yim from assaulting Jang and attempted to tie Yim with a rope, but the process took some two hours.

One flight attendant even brought out a taser gun in the process.

Yim was eventually restrained by the flight crew with the assistance of passengers, including Marx. An Incheon police official said, “Because of the long range of a taser gun, it cannot be used within a cramped airplane. The flight attendants appear to have taken it out to intimidate Yim.”

Yim was transferred to the custody of the police upon arriving at Incheon airport.

Because Yim was too drunk to investigate further, he was released to a guardian Tuesday evening and police planned to resume their investigation later on Wednesday. A police official said, “Yim continued to state he ‘doesn’t remember anything.’”

Korean Airlines said through a statement that the flight attendants responded “according to protocol” and restrained the passenger and handed him over to police. The 53-year-old musician, known best for his hit covers such as "Right Here Waiting" and "Now and Forever," last held a concert in Seoul in June, the first time in 21 years.

Marx had held a concert in Vietnam and he and his wife were on a transfer flight back to their home in Los Angeles. Marx’s wife said she videotaped the fiasco and was planning to release the clip.

Later Wednesday, Marx posted on Twitter that he and his wife were home in Los Angeles “safe and sound,” and added: “No big ‘hero’ move, at all. Just did what I would hope anyone would do in the same situation.”