‘I, Daniel Blake’ emerges as a timely rallying cry

‘I, Daniel Blake’ emerges as a timely rallying cry 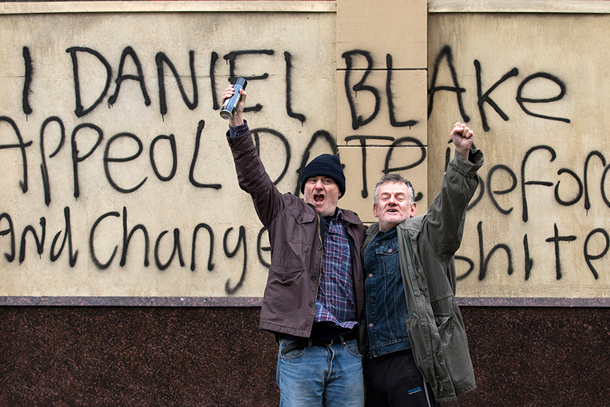 A scene from the film “I, Daniel Blake” directed by Ken Loach. The film, which won the Cannes Film Festival’s Palme d’Or, was released on Dec. 8 in Korea and opened in limited release in North America on Friday. It has struck a nerve, tapping into the same working-class frustrations that are upending politics in Europe and the U.S. [JOONGANG ILBO]

NEW YORK - British director Ken Loach has for 50 years been making lauded dramas rich in social realism that give dignity to the dispossessed. But his “I, Daniel Blake,” which won the Cannes Film Festival’s Palme d’Or, has powerfully struck a nerve, tapping into the same working-class frustrations that are upending politics in Europe and the U.S.

The film, which opened in limited release in North America on Friday, has emerged as a kind of rallying cry, part film and part movement. It’s about a man - a cheery, blue-collar bloke (Dave Johns) - who, after a heart attack, is told by his doctor he’s too sick to work. But his application for government assistance is rejected, leading him down a path both tender and tragic.

In Britain, “I, Daniel Blake” has been the biggest box-office hit of the 80-year-old director’s career. Labour Party leader Jeremy Corbyn urged Prime Minster Theresa May to see the film . Screenings were organized across the country to urge reforms to Britain’s benefits system, which has come under fire for sanctions that critics say keep support services from the needy. The film’s tale, simply and straightforwardly told, rang true for many . Its title was even beamed onto the walls of Parliament.

For Loach, the groundswell around “I, Daniel Blake” points to the widespread rage felt by the working class on both sides of the Atlantic, liberal and conservative.

Politics have long gone hand-in-hand with Loach, 80, a proud socialist who has been called “the Bernie Sanders of social-realistic cinema.” In many ways little has changed for the director, whose working-class portraits like “Kes,” “Cathy Come Home” and “The Wind That Shakes the Barley” are considered among the greatest British films. He and screenwriter Paul Laverty first dive into research. He casts largely nonprofessional actors. And they rehearse.

“What we try to do is to follow the logic of the people and enjoy their comedy as much as anything else,” said Loach. “The process of making it is not about the research or the polemic at all. It’s entirely about who is this person and how do they respond in this situation? And to not turn people into good people and bad people, but just observe the reality of the situation.”

In a sense, it’s less that Loach has made a film that suits the times, and more that the sociopolitical issues he’s long documented and decried about have come to the surface.

“This isn’t an accident. This is the consequence,” he said of the U.S. election. “It’s the consequence of 40, 50 years of neo-liberalism that began with Reagan and Thatcher and the economists they looked up to and the prioritization of the interests of big capital, the big multi-national corporations. Industries were closed down. The work was sent to where the workforce was more vulnerable. Taxes have been lifted for the wealthier people and corporations. This produced not only mass unemployment but mass alienation.”