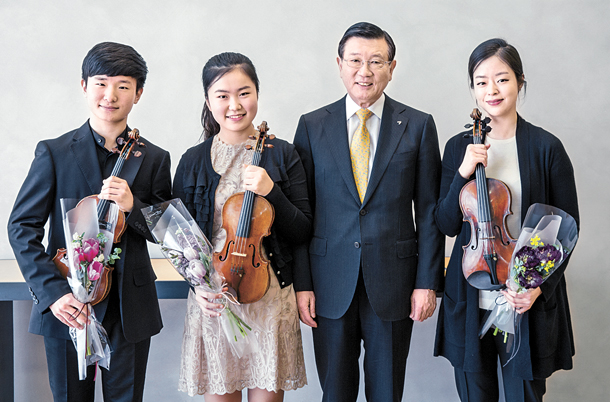 Under the management philosophy of “improving the life of the company’s stakeholders,” Kumho Asiana Group holds various social contribution activities. The company is well-known for its cultural Mecenat activities in particular, which support the cultivation of musical talents as well as the field of classical music through the Kumho Asiana Cultural Foundation established in 1977.

Kumho Asiana Group operates Kumho Art Hall, a concert hall in Gwanghwamun which hosts classical music performances, and Kumho Museum, which has been introducing the works of various artists. The company has hosted performances of overseas orchestras, selecting outstanding musicians as the Kumho Musician of the Year, supporting flight tickets for performers as well as scholarships for gifted musicians. As a result, pianists such as Son Yoel-eum and Kim Sun-wook, and violinists such as Lim Ji-young, Kwon Hyuk-joo and Lee Yu-ra could receive support in pursuing their careers.

The most notable business of Kumho Asiana Cultural Foundation is the “Kumho Instrument Bank,” which has been leasing musical instruments for free to talented young musicians since 1993. The foundation also supported flight tickets to the violinist Lim Ji-young, who was the first Korean violinist to win the highest honor at the 2015 Queen Elizabeth Music Competition.

To revitalize domestic arts and culture, the Kumho Asiana Cultural Foundation has donated 3 billion won ($2.5 million) to Seoul Arts Center in the name of Kumho Cultural Fund to hold the “Seoul Arts Center Music Talent Camp & Competition.” The foundation also established the U-Square Cultural Center in Gwangju in 2009 to promote local cultural activities through hosting classical performances, plays, musicals and art exhibitions at the center. In October, the foundation opened the Kumho Art Hall beneath Yonsei University’s Baekyang-ro to host classical music performances, with a seating capacity of 390 people.

Along with these efforts, Kumho Asiana Group has been both hosting and sponsoring the Asiana International Short Film Festival (AISFF) since 2003 to foster young and talented actors and filmmakers and contribute to the film industry in general. As the first and the biggest international short film festival held domestically, AISFF has now become a major annual international film festival. This year at the AISFF, 5,327 films from 121 countries were submitted.

Having recognized of the efforts to promote works of art and culture, Keumho Asiana Group Chairman Park Sam-koo was given the Montblanc Culture Arts Patronage Award in 2014. The late Park Seong-yong, the older brother of Park Sam-koo as well as the former head director of the Kumho Asiana Cultural Foundation, received the award in 2004 as the first Korean awardee.

The company also holds the Beautiful Lobby Concert in the first floor lobby of its headquarters, located in Gwanghwamun. The Beautiful Lobby Concert was created to celebrate the last Wednesday of each month, designated as “Culture Day” by the Presidential Committee for Cultural Enrichment. Kumho Art Hall and Kumho Museum offer up to 50 percent discount on tickets and admission fees during Culture Day.