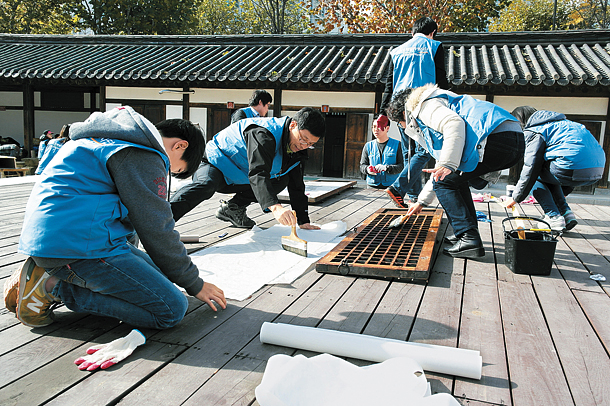 Posco volunteers participate in preservation efforts at Unhyeon Palace in central Seoul. The palace was the residence of King Gojong (1852-1919) before he ascended to the throne. [POSCO]

Posco Group has consistently been engaged in charitable activities since its establishment in 1968.

Posco’s corporate social responsibility activities, which first began in 1988 when the company established relations with local villages to seek mutual growth, experienced further development when the company officially founded the Posco Volunteering Group in 2003. Volunteer activities led by the chief executive officer and other executives have been set up as part of Posco Group’s corporate culture, which encourages workers to participate as well.

The company emphasizes the importance of developing a specialized volunteering program that shows the unique traits of Posco by using the word “Posconality.” In order to realize the idea, the company encourages its workers to volunteer by donating their own professional skills.

Posco now manages 24 talent donating groups in Pohang, North Gyeongsang, Gwangyang in South Jeolla, Seoul and Incheon, where engineering experts engage in activities such as electrical repairs and farm machine repairs and workers certified in first aid have formed a group to help out in emergencies.

The company is also focused on its “Posco Steel Village” venture, which contributes to local communities by constructing steel-made public facilities such as playgrounds and bridges. The project aims to provide safe and durable facilities as quickly as possible, satisfying the needs of locals as well as making the most of Posco’s business strengths.

Since 2009, Posco has been helping families that have suffered fire damage in their homes by constructing steel houses for them. Starting this year, low-income households have also been included as recipients of steel-house support. Compared with concrete buildings, steel houses are designed to be more durable and earthquake-resistant.

In particular, since last year, Posco has been using its magnesium aluminum alloy coating, or PosMAC, to build the exterior of steel houses. PosMAC is a ternary alloy-coated steel plate developed from the company’s own technology that is highly resistant to corrosion, even in rain.

Posco’s volunteer group made up of university students called Beyond, as well as Posco employees, have directly participated in the steel house construction from the beginning to the end, which made the business more meaningful for both the providers and the recipients.

Posco is creating the Posco Steel Village in overseas countries as well. In Vung Tau, Vietnam, the company is constructing a village with houses which can accommodate a total of 104 families as well as a steel playground and a steel bridge. The steel village is to be completed in the first half of 2017, and local Posco workers, members of Posco Volunteering Group as well as university students of Beyond are also lending their hands in the construction.

Meanwhile, Posco established a non-profit organization called “Posco 1% Foundation” in November 2013. The organization is operated by the funds collected from the workers of Posco Group and the company’s suppliers who contribute 1 percent of their salaries. As of now, approximately 23,000 workers are engaged in the business, and the company also matched the employees’ donations.

Posco is currently engaged in various social contribution activities to enhance the social welfare of the marginalized, aid developing regions in Korea as well as other foreign countries, promote the field of culture and art and preserve cultural heritage.