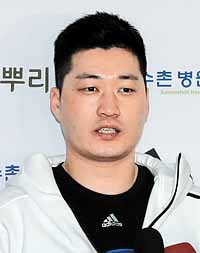 The South Korean right-hander left for Miami, Florida, to begin his offseason training in earnest. He will work out with a personal trainer there before moving over to Jupiter, also in Florida, in mid-February for the Cardinals’ spring training.

The 34-year-old began his rookie season in the MLB last year as a setup man before replacing struggling Trevor Rosenthal as the closer in mid-season. Oh ended the year at 6-3 with 19 saves and a 1.92 ERA in 76 appearances, striking out 103 batters in 79 2/3 innings.

In the National League, Oh was 10th in saves and seventh in appearances. Though he appears to be entrenched as the Cards’ ninth-inning man, Oh said he feels the job is still up for grabs.

“I have to prepare for the season really hard to be the closer again, and I’ll have to go through the competition in spring training,” Oh told reporters at Incheon International Airport. “But I won’t think about the number of saves. We’ve got a stronger team this year, and the primary goal is to make the World Series.”

Oh, following a successful run in both Korea and Japan, signed with the Cardinals in January last year and didn’t leave for Jupiter until Feb. 11. This year, Oh said he feels “a lot more comfortable” because he won’t have to worry about his immediate future.

“Because I’ve already experienced major league spring training, I think I will be able to use my time more efficiently,” Oh added.

Oh said he often “experiments” with his repertoire at camps but added, “The most important thing is to polish up the pitches that I am able to throw.”

Oh may have to halt his U.S. training if he is named to the national team for the World Baseball Classic (WBC), which starts in early March. South Korea manager Kim In-sik initially left Oh off the roster, citing the public’s discomfort over the player’s illegal gambling history. But with the pitching staff having lost some key arms to injuries, calls for Oh’s inclusion have gained traction in recent weeks.

On Wednesday, Kim said he hadn’t yet decided what to do with Oh because the team may have to add an extra starter instead of a reliever. Kim insisted, however, that Oh is “clearly someone that we need.” Kim and his coaches are expected to meet sometime next week to determine Oh’s national team status.