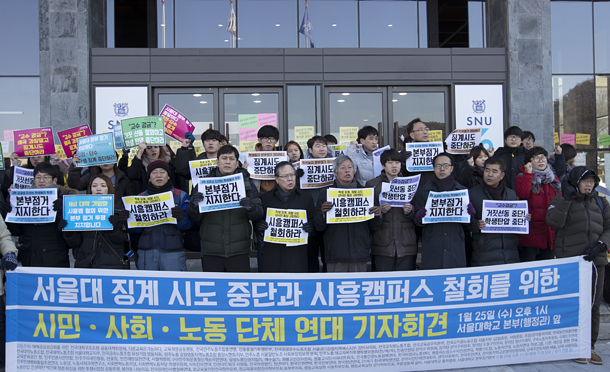 Students and faculty members of Seoul National University stage a rally on Wednesday in support of the students who have occupied the office of the university president for more than 100 days in opposition to the international campus plan. [YONHAP]

The student sit-in at Seoul National University in opposition to the university plan to build an international campus in Gyeonggi had its 108th day on Wednesday.

“We the students are afraid that the university President Sung Nak-in is turning the university into a business,” reads a post on Facebook page created by students engaged in the sit-in. “The new campus is nothing more than a speculative investment in real estate.”

In 2009, the university selected a 660,000 square-meter (163 acre) area in Siheung, Gyeonggi, and the Siheung city government agreed to provide the land for free to the university and fund 450 billion won ($385.8 million) for the construction. Years passed and university presidents came and went, but the project remained without a specific execution plan.

“One president delayed working on the project, and the following presidents also neglected it,” said a professor at the university under the condition of anonymity. “With the student opposition, not much could be done.”

The students took issue with the fact that they learned about the plan only in 2013, when media reports on it surfaced.

“How can the university not inform the students of its decision to establish a campus outside of Seoul,” said one student, “when it can very much affect students’ livelihood?”

That year, Seoul National University was also planning to make the international campus in Siheung a residential college, whereby students, especially freshmen and sophomore, are required to live on campus and receive education and training on character development.

The university students opposing the plan called it a university scheme to rake in money via students’ boarding expenses.

The continued student opposition from 2013 slowed down the project. The university delayed signing an agreement to develop land in Siheung with the Siheung city government from 2014 to 2016. Now, 10 years into planning the international campus project, the university has not yet decided what kind of facilities will enter the Siheung campus.

“I don’t understand why the university would even bother pushing the idea forward if it does not know what it wants to place on that campus after all these years,” said a 21-year-old surnamed Lee who studies economics at the university.

Students began staging a sit-in at the main building of the university from October last year, demanding the university repeal its contract with the Siheung city government. The sit-in grew in size when the students learned of an alleged attempt by the university to expel certain students engaged in the sit-in on Jan. 11.

On Monday, a few university professors were locked in at the main building when students led rallies protesting the university decision to take disciplinary actions against 29 students among those engaged in the sit-in. Some university staff said most of the students’ demands have been heeded.

“There is no plan to establish a residential college, or to request students of certain majors to move to the new campus,” said Hahn Kyu-sup, head of the external relations department at the university.