Gilt-bronze Standing Buddha with Inscription of “the Seventh Yeonga Year”

Gilt-bronze Standing Buddha with Inscription of “the Seventh Yeonga Year” 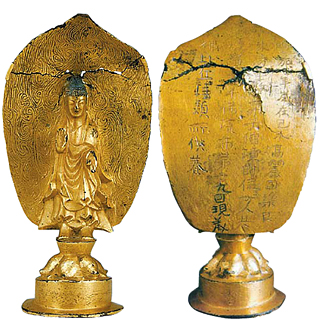 It was found in Uiryeong, South Gyeongsang which used to be a territory of the Silla Dynasty.

The inscriptions on the rear of the mandorla (Buddhist halo of light) of the Buddha image state that the image is the 29th of the 1,000 Buddha images made by monks at Dongsa Temple in Pyongyang.

The Buddha image displays a small turban shell-shaped tuft of hair stuck to the head, which is rarely found among those dating back to the Three Kingdom Period (57 B.C.-A.D. 668), along with an usnisa (a protuberance symbolizing supreme wisdom).

Its small-sized face wears a smile and looks lean.

The fingers of the left hand, which is placed near the waist, point downward.

The bent middle and ring fingers of the left hand are common in Buddha images dating back to the Three Kingdom Period.

The very thick robe conceals the contours of the body. The overall body and the shape of the shoulder give the impression of toughness. The lower ends of the robe, which look like bird feathers, extend outward powerfully.

Researchers suppose that it is a piece made toward the end of the 6th century based on the Chinese characters on the rear side of the mandorla, along with the powerful feeling it exudes.