Hepatitis A affects more people in their 20s, 30s

Hepatitis A affects more people in their 20s, 30s 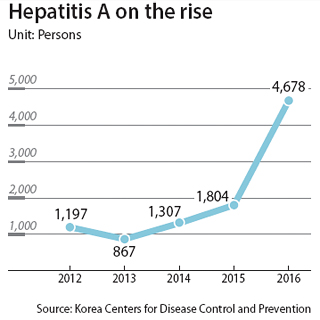 Early this month, a 30-year-old woman living in Yeoju, Gyeonggi, found herself in hospital after suffering from chronic diarrhea and vomiting and was diagnosed with hepatitis A. The mineral water at the nearby park was determined to have been the source of contamination, according to the results of an epidemiological examination by the Korea Centers for Disease Control and Prevention (KCDC).

“After moving from Sangju, North Gyeongsang, at the end of last year,” the woman said, “I heard the park’s mineral water was good for your health so I drank it often at home.”

Last March, 10 people at a construction site located in Sasang District, Busan, collectively contracted hepatitis A. It was found men in their 20s to 40s generally contract hepatitis A through food contamination at a restaurant. There were 1,000 reported cases of hepatitis A in 2011 and 1,804 in 2015. However, there were 4,678 last year, a 263 percent increase. This year is expected to be no different.

According to a report by the Korean Association for the Study of the Liver last year, the antibody retention ratio of hepatitis A for those aged 25 to 29 was the lowest at 16.3 percent, while for those aged 30 to 34 it was 26 percent. For those above 50, the figure was 90 percent.

Normally, after contracting hepatitis A, one recovers after a few weeks, but it can progress to acute liver failure in rare circumstances. In this event, if one does not receive a transplant, one’s life can be endangered. Furthermore, hepatitis A can be fatal particularly for middle-aged men with pre-existing liver conditions or habits of high alcohol consumption. Those in their 20s to 30s can experience diarrhea and jaundice.

The issue is that the source of infection can be difficult to determine and identifying contraction is difficult due to the incubation period of hepatitis A, which is on average 28 days. Hepatitis A generally spreads between people through contact from the hands, lips or genitals, but it can also spread to others via a carrier’s contaminated fecal matter or food.

In 2015, seven 12th graders were infected at a retreat in Suncheon, South Jeolla, but the cause of infection was indeterminate.

There are also many cases of people contracting hepatitis A after traveling abroad. In the 1990s, the genetic strain of hepatitis A was predominately IA, but the imported IIIA strain accounted for 35.6 percent in 2007, and in the next year, 54.6 percent.

Though hepatitis A can be prevented by a simple vaccination, unlike the deadlier hepatitis C, which remains incurable, vaccination rates remain low. In 2011, according to the results of a study by the KCDC, the rate of vaccination for 14 to 17-year-olds was 18.9 percent. In a 2014 study, 32 percent of those in the 7 to 18 range said they “would immediately receive vaccination.”

Since the start of 2012, newborn babies have been able to receive free vaccinations at designated medical facilities. Hepatitis A was included in the national vaccination program in 2015,

“It is important how well hepatitis A is prevented,” said Kim Do-young, professor of gastrointestinal internal medicine at the Severance Hospital. “We need to increase hepatitis A awareness.”