Some may think it’s yet another pile of songs like her previous releases, but for fans of singer and songwriter Park Ji-yoon’s signature airy voice, all 10 songs on her latest album show a different side to the performer, as most of the songs are written by herself in collaboration with other talented songwriters including Jo Jung-chi and Kwak Jin-eon, among others. 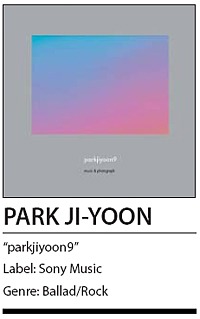 Although the songs are quite similar to one another, you can’t really get sick of Park’s soft and whispering voice. Park said she has put in enough time to work on each song, taking nearly four years to compile all the songs on the album. Her effort can be heard on all the songs, as the harmony between classical instruments and electronic sounds is done to near perfection, offering a calming yet toe-tapping experience. It’s her first release after establishing her own agency, Park Ji Yoon Creative. She has put out two songs as singles, “Don’t Do That” and “Moonrise”, but “The Wall” featuring Kwak is the most attractive to the ears.

Overall, her songs are a good listen with a cup of coffee on a drowsy afternoon.