Bone fragments found from salvaged ferry are from animal: ministry

Bone fragments found from salvaged ferry are from animal: ministry 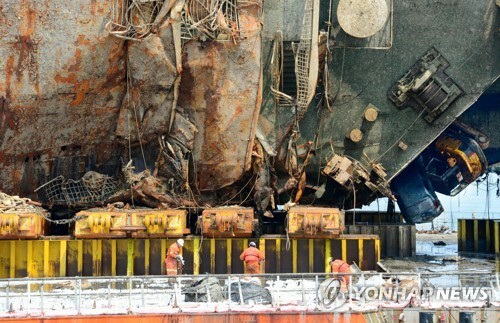 Salvage operators check the place where remains of a missing victim of the Sewol ferry sinking were found on a deck of a semisubmersible ship Tuesday. [YONHAP]

Bone fragments found from the salvaged ferry Sewol were of animal origin, not from a missing victim, the oceans and fisheries ministry said Tuesday, frustrating the bereaved families anxiously waiting for the return of their loved ones who died in the 2014 maritime disaster.

The ministry said that based on the National Forensic Service (NFS)'s onsite inspection results, it concluded all of the seven bone fragments were of animal origin.

NFS officials raised the possibility that the bone pieces were from a pig, the ministry said. They plan to bring the fragments to the NFS headquarters in Wonju, 132 kilometers east of Seoul, for further examination.

A ministry official apologized for causing "confusion" and pledged to prevent the recurrences of such a case.

Earlier in the day, government officials said the remains of a missing victim of the ferry sinking were found at 11:25 a.m. during the ongoing operation to prepare the stricken ship for transport to port.

The sinking resulted in over 300 deaths, with nine of the bodies yet to be recovered.

The Sewol, which capsized in waters off the southwest coast in 2014, is currently on board a huge semisubmersible transportation ship, a week after the salvage operation began last Wednesday.

The government earlier said that divers placed some 160 panels at windows and holes of the ship to prevent further washing away of any items within the hull, but there are still some 100 holes and windows remaining open.

Earlier in the day, a memorial service was held on a separate boat floating near the transport vessel. Buddhist and Catholic priests and Protestant pastors took part in the ceremony.

The relatives of the missing passengers, including four students and two teachers, were present for the service and prayed for the remains of their missing family members to be safely recovered.

Before the bone pieces were found, a joint team of South Korean government officials and Chinese workers from Shanghai Salvage had moved to drain the water and oil from the ferry, which has been submerged in 40 meters of water for nearly three years.

The Sewol is being fixed to the transport ship before heading for the port of Mokpo, some 90 kilometers away, the Ministry of Oceans and Fisheries said.

The ministry said earlier that the salvage vessel will set sail Thursday and arrive at the port on the following day.

When the semisubmersible ship arrives at Mokpo on Friday as planned, it will take up to five days to haul the 6,800-ton vessel to a dry dock.

Then, operators will look in earnest for the nine missing people whose bodies could still be inside the wreck. The search could begin April 10 after workers complete disinfecting the ship, the ministry said.

At the same time, an eight-member fact-finding body will launch a probe to determine the exact cause of the tragedy.

Also, the ministry said a search for any bodies left in the water and on the sea floor, where the Sewol sank, will commence in early April.

The project to pull the ferry out of the water intact was aimed at recovering the bodies of the people still missing and conducting a detailed investigation into the disaster.

The South Korean government decided to push forward with the 85.1 billion-won (US$72 million) project in 2015, with the Chinese consortium led by the state-run Shanghai Salvage winning the bid.