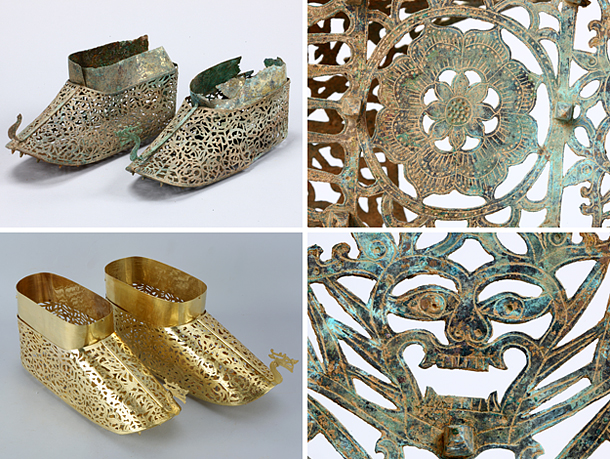 Clockwise from top left: A pair of fifth-century gilt-bronze shoes unearthed from a tomb in Naju, South Jeolla, in October, 2014; A pattern of a lotus flower; and a goblin-like creature; a replica of the shoes researchers made with a traditional technique using 99 percent pure gold.[CULTURAL HERITAGE ADMINISTRATION]

Koreans were astonished in October of 2014 to learn that a pair of fifth-century gilt-bronze shoes were uncovered from a tomb in Naju, South Jeolla.

The shoes, made 1,500 years ago, still sparkled and their details were visible.

Gilt-bronze shoes have been found in Korea before, but none were so intricately decorated and well preserved.

The tips of the shoes, in particular, were decorated with a dragon that looked like it was about to leap. The footwear also featured patterns of lotus flowers and goblin-like creatures.

For the past two years or so, researchers at the Naju National Research Institute of Cultural Heritage studied the shoes in detail. They resorted to modern techniques, like 3-D scanning, X-rays and CT scans, to find out how artisans of the time created this pair of remarkable shoes.

They learned that artisans used copper boards that were 0.5 millimeters (0.02 inches) thick and covered them with a micro-thin layer of 99 percent pure gold.

Researchers at the Naju National Research Institute of Cultural Heritage announced earlier this month that the various patterns were made with two techniques: One is cutting out part of the board and the other is creating a dotted line with triangle-shaped marks.

Based on their findings, they made a replica of the shoes.

“Usually when making a replica, [researchers] would focus on creating the shapes and the colors the same as the original,” Jeon Yong-ho, a researcher at Naju National Research Institute of Cultural Heritage said. “But for the gilt-bronze shoes, we also made sure the materials and the techniques for the recreation were the same as when they were made 1,500 years ago.”

This is why they did not resort to electroplating to plate the copper with gold.

Instead, researchers used the traditional technique that Korean artisans in the fifth century used, known as the “mercury amalgam” technique. They would mix mercury and gold powder and apply heat as strong as 365 degrees Celsius (689 degrees Fahrenheit) to glue gold powder onto the copper surface. In this technique, mercury acts as an adhesive.

Gifts fit for a king

O Dong-seon, a researcher at Naju National Research Institute of Cultural Heritage, said they used 58 grams (2.04 ounces) of 99 percent pure gold to make the replica. It is currently on view at the research institute’s exhibition hall.

The gilt-bronze shoes were found from a tomb that hadn’t been robbed. They were found together with other gold and jade jewelry, weapons, a harness and pottery, suggesting that the tomb’s occupant was likely one of the rulers of Mahan, a confederacy of statelets that existed beginning in the first century B.C. at the southern end of the peninsula.

The pottery pieces found in particular were of the styles of Baekje as well as Gaya, a confederacy of territories in southern Korea between the first and sixth centuries. Observers believe they were likely a gift to the tomb’s occupant, who obviously had influence over the more famous Three Kingdoms of Goguryeo, Silla, and Baekje, that existed in Korea at the same time.

The shoes, which are Baekje-style, were also likely a gift to the Mahan ruler who was buried there.

The shoes are evidently oversized and scholars believe they weren’t for daily wear, but rather for a ritual.

They added that the shoes likely represented the hope that the dead’s spirit would move to a better place.