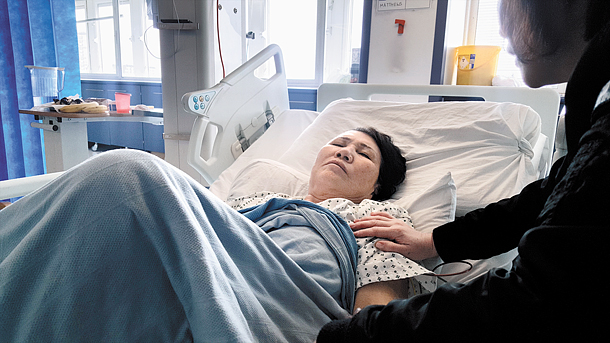 Park, who sustained a head injury in a terror attack in London on March 22, is hospitalized at St Mary’s Hospital, London. She is photographed here on Friday local time. [KIM SUNG-TAK]

Bang Young-sook’s mother was having the holiday of her dreams. An orchard farmer from Yeongcheon, North Gyeongsang, the 70-year-old Park was all smiles as she and her husband posed on London’s picturesque Westminster Bridge on the afternoon of March 22.

The couple’s group tour to Europe was paid for by their children. Britain was their first stop. After the photo was snapped, Park’s husband walked on while Park stopped to arrange her selfie stick.

That brief pause led to tragedy. Park’s husband heard screams and turned back. A car had ploughed into the pedestrians on the bridge - and his wife was among dozens mowed down.

The terror attack in London by a 52-year old convert to Islam killed five and injured 50. Five Koreans were injured and Park sustained the most serious injuries. The other four, people in their 50s and 60s, were discharged after being treated for fractures and minor injuries. Park is still in London’s St Mary’s Hospital. In the pandemonium on the bridge, Park fell and hit her head. She required brain surgery. 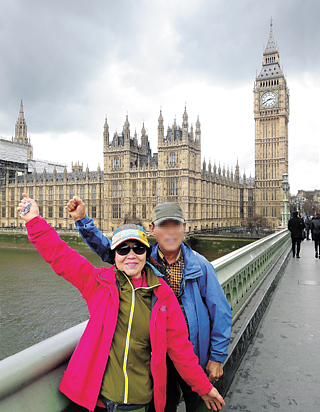 Park with her husband on Westminster Bridge minutes before a car plowed into pedestrians. [FAMILY OF PARK]

(Neither Park nor her husband have agreed to their full names being published. Their daughter has.)

Bang’s world changed since that day. Leaving her two children with her mother-in-law, the 38-year-old flew to London. She had to wait a week before her mother regained consciousness after brain surgery. Park recognized her daughter and husband, but could not move a muscle on the left side of her body.

“She showed signs of getting better a week after the surgery, as she was able to move her left hand and foot a little,” Bang told the JoongAng Ilbo at the hospital on Friday. “But then she started asking why there were so many foreigners in this hospital in Yeongcheon.

“She kept saying that she needs to get better before her children send her on a trip to Europe next month.”

Park is suffering from memory loss and bouts of delirium at night. Her behavior is totally uncharacteristic.

“The mother that I know would be worried about the kids I left back home,” Bang said. “But instead, she throws tantrums like a baby and does not sleep at night, yelling and screaming.”

Bang is staying in a lodging arranged by a Korean church and a volunteer group. Every day she receives calls from her 8-year-old and 10-year-old kids in Korea.

“My mother suffered a brain injury, and she is likely to have after-effects,” Bang said. “But I don’t know if we are going to have to stay here for the treatments.”

The British government is paying for Park’s treatment in London, but it is unclear whether it will cover medical bills outside of the country.

“I’m not sure if we will be able to cover the medical bills in Korea,” Bang said.

Korean travel insurance products do not clearly state whether an injury or loss from a terror attack abroad are covered.

“We are currently discussing the matter with the British government, but there has been no discussion on covering Park’s treatment outside of the U.K.,” said an official of the Korean Embassy in London. “The Korean Ministry of Foreign Affairs will soon issue a statement on how the Korean government will assist Park.”

Some churches in London and Yeongcheon have begun fundraising for Park.

“You can request compensation for after-effects from a car accident in the U.K. for up to 15 years after the accident,” said Jeon Gong-soo, a pastor in London assisting Park. “The Korean Foreign Ministry and the Korean Embassy must actively engage the British government to help Park, since she sustained the brain injury from a terror attack while traveling in London.”

Park is awaiting a second brain surgery. It was supposed to be conducted on Friday but was cancelled due to the low level of magnesium and sodium in her blood.

“Mom, I made you seaweed soup,” Bang told her mother lying on the bed on Friday. “I made it extra salty because the doctors said you need more sodium.”