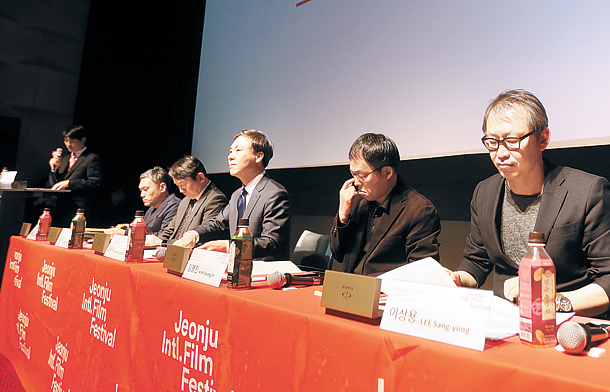 The organizing committee of the Jeonju International Film Festival announces the lineup of the 18th edition of the film festival. [YONHAP]

The 18th edition of the Jeonju International Film Festival (JIFF) kicked off in the southwestern city of Jeonju, North Jeolla on Thursday.

Screening officially began at 7 p.m. with “On Body and Soul,” which won the Golden Bear at this year’s Berlin International Film Festival in February. Directed by Hungarian filmmaker Ildiko Enyedi, the film is an atmospheric love story set against the backdrop of a Hungarian slaughterhouse.

JIFF will run for 10 days until Japanese filmmaker Shinobu Yaguchi’s “Survival Family,” a satirical story of a family in Tokyo that finds themselves in an unexplained blackout, wraps the event at 7 p.m. at Jeonju Dome.

This year’s festival will screen a total of 229 movies from 58 countries.

In the International Competition section, 10 titles, including Jung Yoon-suk’s “Bamseom Pirates Seoul Inferno,” about a Korean band infamous for their raucous lyrics facing a crisis after their producer is arrested for retweeting pro-North Korean tweets, and the Israel-France film “In Between,” directed by Maysaloun Hamoud which revolves around three young Palestinian women who are caught between hometown traditions and life in the big city, will be competing for the prize.

As for the Korean Competition section, 11 movies, including Hwang Kyu-il’s “Saem,” about a man who suffers from face blindness looking for his first love, and Lim Tae-gue’s “The Seeds of Violence,” about violence in the military, have been invited.

The slogan for this year’s JIFF is “Outlet for Cinematic Expression” and it features a new Frontline section, which JIFF programmer Jang Byung-won referred to as “a haven of cinematic expression.” The category represents the front line of cinema today through daring imagination, controversial themes, innovative styles and bold expression.

Though JIFF’s overall lineup has expanded this year, the number of Chinese films has drastically fallen amid the icy Korea-China relations over the U.S.-led Terminal High Altitude Area Defense (Thaad) missile shield.

Filmmaker Rong Guang Rong’s “Children are Not Afraid of Death, Children are Afraid of Ghosts,” screening in the Expanded Cinema section, is one of the several Chinese directors who refused to attend the film festival due to the political tension between the two neighboring countries.

“Director Rong Guang Rong was confirmed to come [to Jeonju]. His sudden notification puts us in an awkward position right ahead of the festival,” a source from JIFF’s organization committee was quoted as saying earlier this month.

Directors Zhu Shengze and Jia Zhang-ke, who are each behind “Another Year,” featured in the Frontline category, and “The Hedonists,” in the World Cinemascape: Masters for Shorts category have also turned down their invitations.

Audiences will nevertheless be able to enjoy a number of special events, including Master Class, where they can meet artists like British filmmaker Michael Winterbottom (“Jude”) who have achieved high cinematic accomplishments. Also, director Kim Sung-soo and popular actors Jung Woo-sung and Ju Ji-hoon will greet their fans after last year’s crime action film “Asura: The City of Madness” is screened on Saturday at 7 p.m.