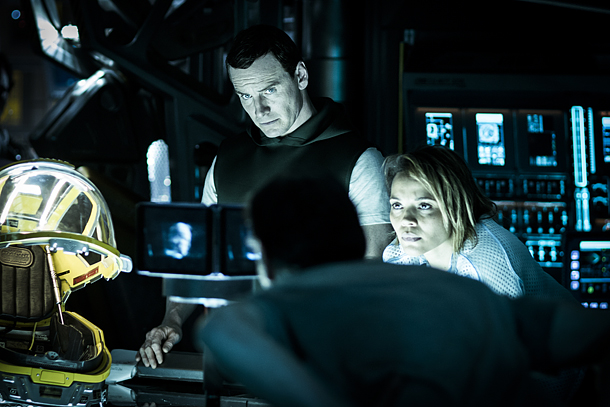 Science fiction maestro Ridley Scott’s newest installment of the Alien franchise was no disappointment at the box office. From Friday to Sunday, “Alien: Covenant,” starring Michael Fassbender and Katherine Waterston, debuted at number one, accounting for 25.8 percent of the weekend’s entire ticket sales.

Local crime comedy “The Sheriff in Town” came at second with 425,000 tickets. Directed by Kim Hyeong-ju, and starring Lee Sung-min and Cho Jin-woong, the male-centered movie maintained its second-place spot in its second weekend. The movie, which had a low expectations being released against strong competition like Marvel’s “Guardians of the Galaxy Vol.2” and DreamWorks Animation’s “The Boss Baby,” has managed to sell 2.2 million tickets since it dropped on May 3.

“The Boss Baby,” featuring a big-headed blonde baby with a husky voice, placed third in its second weekend with 348,000 tickets. The animated film, which kicks off with sibling rivalry and later becomes a tribute to family and brotherhood, has sold a total of 1.9 million admissions.

The second chapter of the “Guardians” franchise closely followed with 325,000 admissions.

Local suspense thriller “The Tooth and the Nail” rounded out the top five in its first weekend with 150,000 admissions. Starring Go Soo and Kim Joo-hyuck, it centers on a rich man and a mysterious driver who are embroiled in a mysterious murder case. Set in Korea right after it was liberated from Japanese colonial rule (1910-45), the movie is an adaptation of Bill S. Ballinger’s 1955 novel of the same title.