Struggling businesses get a leg up

Struggling businesses get a leg up 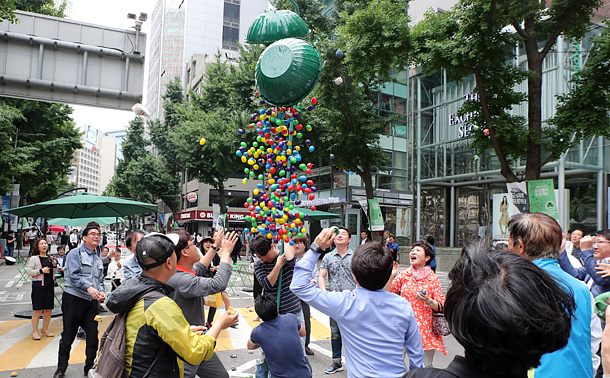 Coupons for restaurants in the vicinity pour out of a pinata on Mugyo Road near Seoul City Hall in central Seoul on May 25, as passersby participate in a flash-mob event put together by the city government and associations of merchants and district companies. [SEOUL METROPOLITAN GOVERNMENT]

The mood was high during lunch on May 25 on the street adjacent to Seoul City Hall, which is normally filled with men and women in business suits rushing to work, as office workers and passersby joined in to take a few swings at a pinata.

As the pinata broke open, about 300 ping-pong balls fell out, each containing coupons for restaurants around the block.

The game was part of the Urban Rejuvenation Project, planned by the Seoul Metropolitan Government and locals on Mugyo Road, to boost foot traffic for businesses around the block, which are typically only busy during weekdays.

“This area of Da-dong and Mugyo-dong in central Seoul used to feel kind of old, what with the area only frequented by office workers during lunchtime,” said Cho Min-ji, a 30-year-old office worker. “The festivities today totally freshened up the area.”

A section of the Mugyo Road was blocked from traffic from 11 a.m. to 1 p.m. from May 22 to 27, and a total of about 5,000 people joined in, according to the city government. On May 24, dozens of models walked down the street, which is normally filled with cars, in a surprise runway event during lunch hour.

“Urban development programs that focuses on livening up spaces with foot traffic and participation are very efficient and the results are visible fairly quickly,” said Yeo Jang-kwon, a policy director of the Urban Regeneration Headquarters of the city government. “On the other hand, the results of city development programs led by central and local governments are not so tangible five or six years down the road.”

The 11,000 square-meter (2.7 acre) Mugyo-dong in Jung District was chosen as the first destination for the Urban Rejuvenation Project to help struggling local businesses.

“Ever since the government put forward policies to discourage people from working on Saturdays, my business struggles,” said Shin Dong-min, 55, whose family has been running a restaurant in the area since 1932. “The streets may get busy during weekdays but are pretty much empty throughout the weekend.”

The local merchants association, corporate association and the Jung District Office signed an agreement on May 24 to cooperate on the Urban Rejuvenation Project.

“I will try my best to transform this area into a lively space during the weekends,” said Yang Young-cheol, president of the local merchants association.

“There are about 3,000 similar people-based city rejuvenation projects in the United States and 150 in Japan,” said Lee Jung-hyung, architecture professor at Chung-Ang University in southern Seoul. “A successful example is Times Square in New York. The area was crime-ridden in the 1970s, but a people-based project to renovate the city involving residents, shopkeepers and companies in 1992 turned Times Square into a popular tourist site.”

The Seoul city government said it will also support the projects financially.

“The city government will assist the projects to ensure that they can continue to make profits,” said Jin Hee-seon, head of the Urban Space Improvement Bureau.