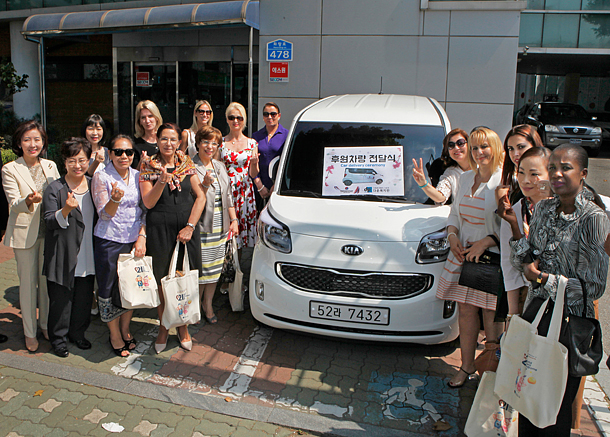 Liberty Korea Party Rep. Na Kyung-won, left, an adviser of the Korea Down Syndrome Society, and the Down Community Rehabilitation Center Director Kim In-sook, second from left, and President of the Ambassadors Spouses Association in Seoul (ASAS) Nehal Selim, also wife of ambassador of Egypt to Korea, fifth from left, pose with members of the ASAS in front of the center in northern Seoul on Friday, next to the Kia Ray automobile that the ASAS presented to the society after raising funds in a charity gala. [PARK SANG-MOON]

Members of the Ambassadors Spouses Association in Seoul (ASAS) presented 50 million won ($43,982) it raised in its first-ever charity gala to the Korea Down Syndrome Society at its Down Community Rehabilitation Center in northern Seoul on Friday.

“It is our pleasure today to present this donation to the Korea Down Syndrome Society,” said Nehal Selim, wife of the ambassador of Egypt to Korea and president of the ASAS. “This donation is the precious fruit of hard work by ASAS to realize the dream to convene its first charity ball. Even for us, [the funds raised] were beyond our expectations and we are very thankful to God that we could present them to you.”

Part of the 50 million won donation was a Kia Ray automobile, which the society said was particularly needed by its Down Community Rehabilitation Center.

“We needed a mini car to pick up some handicapped people from their homes,” said Kim Chung-ryul, president of the society’s Social Welfare Foundation. “The roads leading to their homes are quite narrow and we cannot use the center’s van.

“To our surprise, we heard from the ASAS that the funds raised at the ball totaled 50 million won,” he said. “Once again, we thank you very much.”

Fifteen ASAS members who celebrated the presentation of the funds at the Down Community Rehabilitation Center on Friday were greeted by members at the center, including two members who performed a K-pop dance as part of the celebration.

Rep. Na Kyung-won of the Liberty Korea Party congratulated the ASAS and the Korea Down Syndrome Society. Na is an adviser of the society. Her daughter was born with Down syndrome.

“I sincerely hope that this relationship between members of the ASAS and the Korea Down Syndrome Society continues,” Na said. “I always like to say that if we go together, we can go very far. The fact that spouses of the ambassadors are here means a lot to us, and the fact that you are all here means we are bringing forward a society where all of us go together, disabled and non-disabled.”

Some 250 to 300 people with development disorders, including Down syndrome, visit the Down Community Rehabilitation Center every day for classes, activities and training, including gym, choir and barista classes.

“We will be putting to good use the funds that were raised by buying two running machines for the gym here, as most of the ones we have are out of order or very old, a coffee machine to help more people train to become baristas, dish dryers and washing machines for our group homes and 24-hour care center, as well as in running a chorus class here,” Kim said. “All of you are invited to our annual choir festival.”

“We are thankful to the Korean and foreign corporations, honorary consuls of embassies, the Red Cross, the Seoul International Women’s Association, Planting Love, and more friends of ASAS who have made all this possible,” Selim said. “So many members of the ASAS worked very hard and they worked from the bottom of their hearts on this project, and we hope to host more charity galas in the future.”

The ASAS organized its first charity ball on May 18 at the Lotte Hotel Seoul in central Seoul, which was co-organized by the Korean Cultural Association and sponsored by Lotte Group. It was attended by some 300 people.