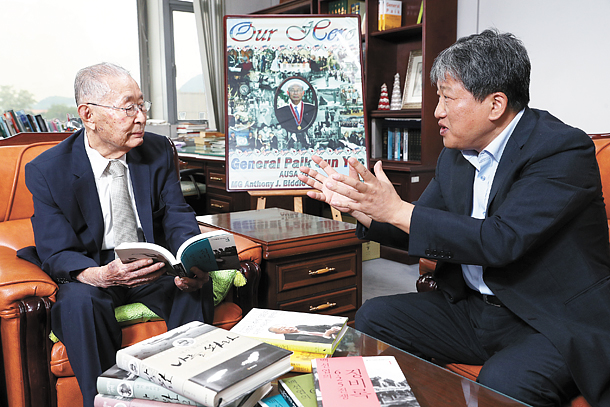 Yoo Kwang-jong, head of the China Research Center, right, chats with Paik Sun-yup, general during the Korean War, at the offices of the Association of the Republic of Korea Army at the War Memorial of Korea in Yongsan District, central Seoul. [KIM HYOON-DONG]

Every year there are fewer survivors of the Korean War.

Yoo Kwang-jong, head of the China Research Center and former JoongAng Ilbo reporter, recently published his last volume on his series of biographies on Paik Sun-yup, the most active Korean War general, offering a rare testament to his life.

The Paik biographies began by commemorating the 60th anniversary of the Korean War on Jan. 4, 2010, when the JoongAng Ilbo featured the first of 277 articles, which Yoo eventually compiled as “The Korean War and the Republic of Korea I experienced.”

The next year, on Feb. 28, the series filled one page five times a week for seven years, garnering massive support. 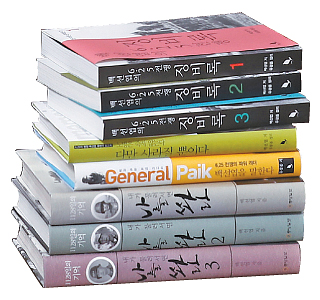 Yoo recently wrote “Paik Sun-yup’s Korean War Reminiscence,” the third volume of his last series. His other publications include “If I Withdraw, Shoot Me. Memories of 1,128 Days,” “An Old Soldier Doesn’t Die, They Merely Disappear,” and “General Paik: Leadership During the Korean War.”

“I hope our nation is ever aware of an historical event such as the Korean War,” said Paik.

Recalling his first encounter with Paik in 2009, Yoo said, “He made a solid impression sitting there with such a firm posture.”

He met with Paik three to four times a week at Paik’s office.

“General Paik’s biographies are accurate and are without a hint of exaggeration,” said Yoo. “General Paik defines war as ‘mobilizing all strength, ability, emotions and thought, the final technique.’ I wanted to review our society through the Korean War. It’s called the Forgotten War in the United States, but we were the first to forget. The war only remains in anti-communist posters. When I looked for who stayed at the end, when our military was hopelessly driven back, it was General Paik.”

Yoo calls Paik a “true victor,” and when asked to elaborate on “the retreat at Yongbyon in October 1950,” he said, “At the time, if the 1st Infantry Division, which Paik was tasked with, had entered deeper into the fray, they would have been ambushed by the Chinese communists.”

He added, “If that had happened, the 1st Infantry Division attached to the American 1st Corps would have collapsed. By General Paik’s judgment, the American 8th Army’s main 1st Corps was able to preserve its military force and equipment. Advancing is a basic, but a great general must also know when to pull out. General Paik is a true commander.”