Cyclists have message for the world

Cyclists have message for the world 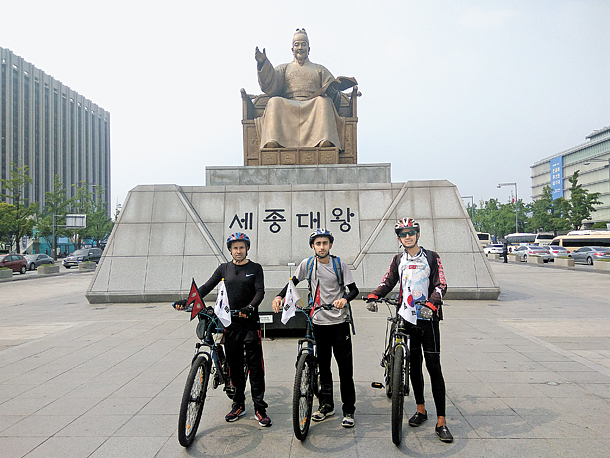 From left, Nirmal Barl, Dilip Chhetri and Anish Dhakal pose for a picture in front of the statue of King Sejong in Gwanghwamun Square. [ANISH DHAKAL]

After witnessing the devastating effects of the 2015 earthquake in Nepal, which killed nearly 9,000 people and injured about 22,000, Anish Dhakal, an environmental activist, convinced his two social worker friends to embark on a world cycling tour to spread a message of environmental change.

Dhakal, Dilip Chhertri and Nirmal Baral have cycled more than 15,000 kilometers (9,320 miles). They arrived in Korea on June 26 and cycled from Incheon to Gunpo and Suwon.

The group chose cycling because it is healthy and eco-friendly. It fits their message of environmental change since it burns fat rather than fuel.

“Over the years, environmental degradation has become a big issue on our planet. Various plight have been created that the world itself sometimes seems incapable of facing,” said Dhakal.

“It is important for us people to understand that the environment is like a vital organ for this planet. It is the time to save our home from human recklessness.”

Dhakal, Chhertri and Baral took leave of their jobs to start the bicycle tour on Dec. 30, 2016, hoping to touch every continent and 100 countries within five years. They hope to return to Nepal by Dec. 30, 2021. Their trip is self-funded, but at times they receive support from local Nepali communities through fundraising.

“We hope that our presence in towns along our journey will help people realize that everyone can play a role in saving the environment,” Dhakal said.

Through their journey, they’ve met a lot of people, especially younger people. Many young people have asked the purpose of their trip.

They believe their odyssey can at least raise awareness of environmental issues.

“We try to interact with people,” Dhakal said. “Also, we are delivering a message that if a person can travel from one country to another via bicycle, why can’t you use a bike once a week and reduce your carbon footprint?”

In every country, they seek opportunities to spread the message though interviews with local newspapers. They talk about global warming, climate change and highlight the importance of peace and love on the earth.

“We don’t claim that we can change the whole world but we do believe that our tour will give a message to young and old about the importance of environmental protection,” said Dhakal. “And we affirm that our tour will bring some change in people’s lives and help make this world a better place to live.”

The trio leave for Israel on Saturday.