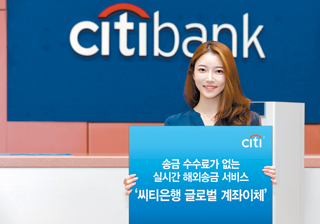 It was late at night in Korea when Mr. Kim received an urgent call from his daughter studying in the United States asking if he could wire her some money to take care of an urgent matter.

The banks were all closed, so he searched online for a service that could send her money immediately and found “Citibank Global Transfers” which allows real-time overseas remittance.

Mr. Kim was surprised that he was able to transfer the money over the phone with just the name of his daughter and her account number.
He felt relieved when he received a message from her saying she received the money. “I didn’t expect the money to be transferred so promptly,” she wrote. “I am really thankful.”

Mr. Kim said he was highly satisfied with the service because Citibank Global Transfers did not charge any fees and the money was sent immediately.

With more people studying and living abroad, demand for overseas remittance is growing. Banks specializing in online services have entered the market and are doing well based on the premise of low transfer fees. Citibank Global Transfers is following this trend and gaining ground.

Normally, overseas remittance takes about one to three days for banks to process, but with Citibank Global Transfers, the receiver gets the money in real time. Another plus: the service has no intermediary bank charge, telegram charge nor receiving bank charge.

Users can conveniently send money from 9:10 a.m. to 10 p.m. on weekdays without having to visit a brick-and-mortar branch. Remittance is also possible at any Citibank ATM if a previous transfer has been made.

“Citibank Global Transfers is becoming popular because it allows real-time and precise transfers without any remittance charges,” a Citibank Korea official said. “Citibank Korea is going to put more effort into providing more convenience for users by expanding partnerships with foreign banks and extending service hours.”

Citibank Global Transfers works in 18 countries and is able to transfer money in 17 currencies.

The exchange rates used are specific to Citibank Global Transfers and can be found on Citibank’s website.