Chef Sam Kim whips up pasta for a good cause

Chef Sam Kim whips up pasta for a good cause 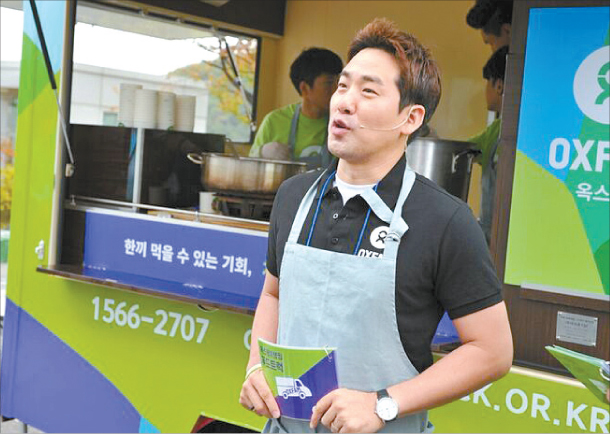 Sam Kim is speaking in front of a food truck on Aug. 26 outside Paju Premium Outlets in Gyeonggi, in his periodic food truck campaign where he cooks and speaks to raise funds and awareness about the worldwide food crisis. [OXFAM]

Sam Kim, head chef of Buona Sera, an Italian restaurant in Gangnam District, southern Seoul, and star chef on JTBC’s “Please Take Care of My Refrigerator,” says he spends some of his Friday and Saturday lunches making pasta for a cause.

“Food truck campaigns were something that I did often when I was learning how to cook in the United States,” he told the JoongAng Ilbo on Aug. 21. “And I always dreamed of doing it after I became a chef myself. Things get pretty busy on any given day, but these days I’m working until after midnight, preparing for the food truck campaign on the coming weekend. I’m probably the first to run food truck campaigns in Korea.”

That weekend, Kim made Gorgonzola mushrooms and cream pasta for about 1,000 people.

“Did you know that one out of eight people in this world are starving - that’s 800 million people,” he said while parked outside Paju Premium Outlets in Gyeonggi on Aug. 26. “For those living through civil strife or natural disaster, the world is total chaos. Some have to drink dirty water, knowing they will get sick, because they don’t have any other choice. I can’t keep on pretending I don’t know what’s going on in the world, when one out of three babies die of malnutrition before they turn 5.”

As many as 80 people signed up that weekend to become sponsors of food programs at Oxfam. This was the 10th food truck campaign Kim carried out with Oxfam in Korea since 2015. So far, his campaigns have fed 9,400 people, of whom 1,200 became sponsors at Oxfam.

Kim also recently opened up his own restaurant in Hapjeong-dong, western Seoul, called Osteria Samkim. It’s the first restaurant he has owned in his 20 years as a chef.

“I’ve had opportunities to open one up before, but I was quite cautious and worried about a lot of things,” Kim said. “Some people think opening up a restaurant can be an easy fallback plan, but it’s really not. People don’t come to restaurants just for the food. You have to meet a lot of people, do a lot of research, explore areas and try a lot of dishes.”

He added, “Above all, the concept of the restaurant is so important. Whether it be about the food or the interior design, there needs to be something about the restaurant that sticks in their minds after their experience.”

When it comes down to opening up a food truck restaurant, Kim advised those interested to “stick to the right menu.”

He said, “It has to be something simple, so that people can eat it easily while standing up, without using forks or other utensils. And the food should be served hot, just off the grill or fire, to distinguish food truck restaurants from fast-food places.”

But having a brick-and-mortar business doesn’t mean he’s going to stop running his food trucks, which are doing very well.

“We’re raising 36 million won [$32,040] a month through the campaigns, and 432 million won a year,” Kim said. “Every food truck campaign raises enough to feed 10,000 people for 10 days. So why not do it? I’m thankful to the chefs for helping me in these campaigns four times a year. I intend to continue doing it for the next five or 10 years.”

He said he chose to use food trucks for his campaigns because they allow him to visit customers instead of the other way around.

“It’s just right that I go to the people who may be interested in sponsoring these programs, instead of calling them over to a place,” he said. “For me, cooking is how I show my gratitude to people taking an interest in these causes.”