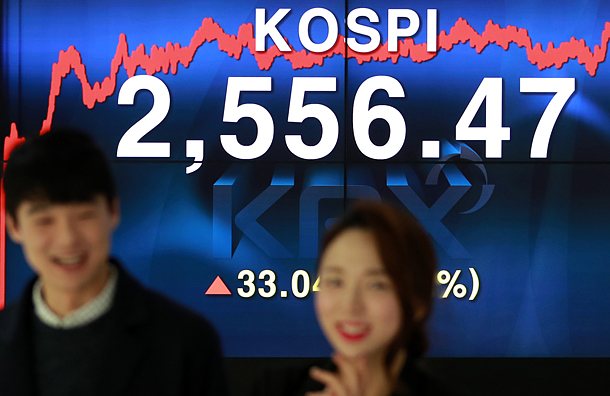 The benchmark Kospi stayed on its bullish streak thanks to strong corporate earnings and a breakthrough in strained relations with China, which pushed the index to close beyond the 2,550 mark for the first time.

It was the fourth day in a row that the main bourse went up. Excepting Oct. 26, the index has risen for 10 consecutive days.

Analysts say that a combination of favorable factors - earnings surprises of market bigwigs, improved exports and an easing of diplomatic tensions with China - all contributed to the rally. 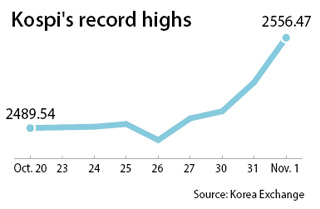 One of the key drivers was Samsung Electronics, the country’s largest tech giant, which announced record- high third quarter profits and a decision to double dividends for shareholders on Tuesday.

“Samsung’s announcement that it will expand dividends also contributed to the rise.”

The company said it would increase dividends this year by 20 percent, and then double them next year.

Seoul and Beijing agreed to end a year-long stand-off over the installation of a U.S. antimissile system, which took its toll on Korean businesses heavily dependent on Chinese customers.

“The two countries made efforts to mend ties and the move is raising hopes that the risks associated with the dispute surrounding the Terminal High Altitude Area Defense [Thaad]missile system could be addressed,” the analyst said.

China stopped group tours coming to Korea, encouraged a boycott of Korean products and rejected some Korean exports to China.

Cosmetics and car exports were among the hardest hit, along with exports of cultural content like TV shows and pop songs.

But some analysts were cautious over whether the hot streak will go on through the end of this year.

“The buying trend among foreign investors will likely continue until the middle of November,” said Lee Eun-taek, an analyst at KB Securities.

“But we need more time to predict December’s Kospi performance. The series of record highs means an adjustment is maybe on the horizon.

So this momentum will likely subside by the end of this year or early next year. ”

The benchmark Kospi topped the 2,500 mark in intraday trading for the first time in history on Monday.

On that day, the Kospi hit an all-time high of 2,500.3 less than three minutes after the opening as investors bet on sound earnings in the third quarter and a cheerful investment sentiment from record high market indexes in the United States.

The bullish move prompted securities companies to raise their targets for the Kospi.

Shinhan Investment, for instance, said that the market could reach 2,800 in the first half of next year based on trends in the U.S. and Korean stock markets.