[National Treasure] Love and life in the 18th-century Joseon era

[National Treasure] Love and life in the 18th-century Joseon era 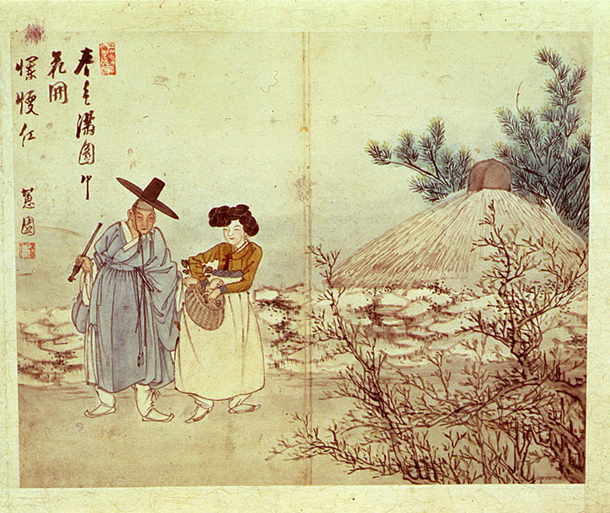 He was a painter who belonged to Dohwaseo (Royal Bureau of Painting) like his father Sin Han-pyeong and made landscape paintings displaying refreshing colors.

He carved his own niche in genre paintings.

The pieces contained in this album portray the love and romance between men and women, particularly between womanizers and barmaids, and a placid life of leisure enjoyed by noble-class people.

The thin and delicate strokes of brush and the beautiful colors used effectively depict a refined, romantic atmosphere. The slender face of the people appearing in the paintings, with the corners of their eyes raised, gives the impression that they have strong sex appeal.

The realistic portrayal of the surroundings appears to enhance the atmosphere that the painter intends to create. He did not disclose when he made the paintings in most of this works, however.

Thus, it is difficult to see how his painting style changed over time. This album had been taken to Japan.

In 1930, Jeon Hyeong-pil purchased it from a Japanese and rearranged it.

O Se-chang wrote an introduction for the newly arranged album.

Besides being a collection of artworks, the album is regarded as a precious material for those studying how people’s daily lives and attire changed toward the end of the 18th century.