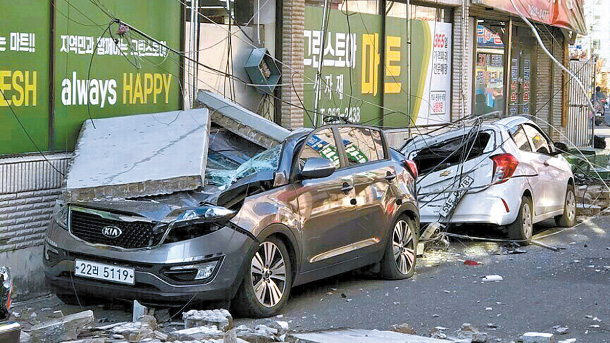 Passenger cars parked next to a building were crushed by debris that fell from the building after a magnitude 5.4 earthquake hit the city of Pohang, North Gyeongsang, on Wednesday. [SCREEN CAPTURE FROM TWITTER]

A 5.4-magnitude earthquake shook the city of Pohang in North Gyeongsang Wednesday afternoon, the second strongest ever for Korea, followed within hours by a 4.6-magnitude aftershock. The Ministry of Education announced that the CSAT (College Scholastic Ability Test), originally scheduled to take place today, will be delayed one week. “A 5.4-magnitude earthquake hit a point some 9 kilometers [5.6 miles] north of Buk District in Pohang at 2:29 p.m.,” said the Korea Meteorological Administration (KMA). “A 4.6-magnitude quake hit a point 8 kilometers north of Buk District at 4:49 p.m.”

Aftershocks ranging from 2.5 to 4.6 magnitudes followed, and more are expected for months, according to the KMA. Authorities said seven people were injured as of 4:30 p.m. Wednesday. The fire department received a total of 7,032 reports by people who felt the tremors, of which 2,016 were in North Gyeongsang, 1,205 in Seoul and 669 in Daegu. Central Seoul is located some 270 kilometers from Pohang.

North Gyeongsang is home to twelve of Korea’s 24 nuclear power plants. All were operating normally as of 4 p.m.

“We are remaining alert to shut down plants if there are any signs of danger,” said a spokesperson for the Korea Hydro and Nuclear Power Company, the largest electric power company. 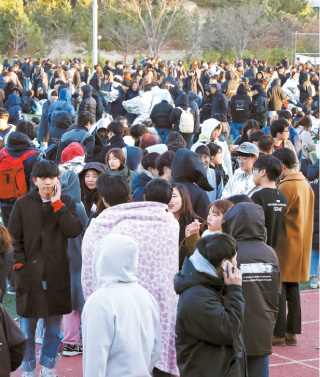 College students and faculty members of Handong Global University in Pohang ran out of the building as parts of the facade of a campus building crumbled after the quake shook the area on Wednesday. [YONHAP]

The strongest earthquake to have hit Korea was a 5.8-magnitude quake that hit Gyeongju, North Gyeongsang, on Sept. 12, 2016. The quake in Pohang took place some 8 kilometers under the ground. The quake in Gyeongju took place 15 kilometers below the surface.

The Blue House said President Moon Jae-in held an emergency meeting with top aides after he arrived in Seoul on Wednesday from a trip to Southeast Asia to discuss emergency responses to the quakes.

A few minutes after the first quake, the facade of a building at Handong Global University crashed to the ground as students poured out, as shown in a video posted online by a student.

“The classroom shook,” said a 21-year-old student at the university surnamed Jeon. “My friends and I ran out of the building together.”

The university canceled classes for the rest of the week.

“Everything fell to the floor at home and I just remember running out of the house,” said Kim Hwa-sook, a 76-year-old resident of the same district.

Buildings in Heunghae town in Buk District lost roofs or walls or developed cracks after the quake. Photos posted online by Pohang residents showed vehicles crushed by remnants of walls that came down, coffee pots and photo frames shattered at home and books tumbled completely out of bookshelves.

The Yangsan fault zone involves the tectonic plate that runs from Yeongdeok County of North Gyeongsang, through Yangsan of South Gyeongsang and all the way down south to Busan, stretching some 170 kilometers.