Chocolatier is in the business of making people happy

Chocolatier is in the business of making people happy 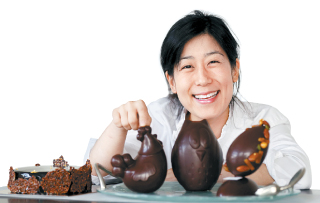 After working for 10 years at SK, Kim Hee-jung resigned in 2014 to follow her lifelong dream to become a pastry chef and chocolatier.

“I graduated from a prestigious college, Yonsei University, and got employed at SK,” says Kim. “Although I had a stable job, I wasn’t happy.”

Kim is the founder of Le Peche Mignon, a bakery and chocolate studio in Itaewon, central Seoul.

After studying French for a year, Kim was accepted to her dream pastry school, Ecole Nationale Superieure de Patisserie (ENSP) in Yssinguex, 100 kilometers (62 miles) from Lyon. Kim found herself to be one of the few East Asian students enrolled at the school.

“Because ENSP focuses on mastering patisserie and chocolate within eight months, the courses are recognized as being highly intensive,” says Kim. “Aside from it being a prestigious school, I chose to attend ENSP because I could be certified in a short period of time.”

After receiving her French patisserie diploma from ENSP, she took a course on chocolate mastery.

“The most important part of making high quality chocolate is the finishing touch,” says Kim.

Kim eventually became a certified chocolatier and is now one of the few chocolatiers certified in France who works in Korea. She opened Le Peche Mignon in August and said she will offer baking classes starting Monday. Kim explained that the name of her shop means “small guilt,” or something one really likes.

“Although I’m starting out with a bakery,” she says, “my ultimate goal is to make the store bigger through chocolate courses and make people happy with the chocolate I produce.”

Kim adds, “Even if your current job is your only means of living, if you’re not happy with it, you should reconsider your goals. Although I acted rash and got to where I am, I want to advise others to take their time and carefully prepare their next steps.”