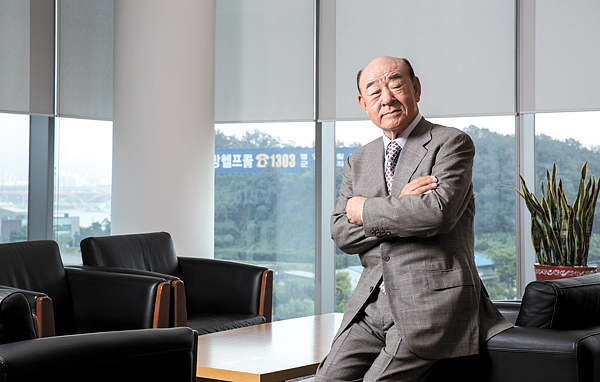 Lee Chu-yong, Chairman and founder of the company

KCC’s 50-year history accompanied the development of not only the IT industry in Korea but also various other industries in the nation. The company laid the stepping stone for the country’s economic development by introducing Korea’s first computer with its establishment in 1967.

In the 1970s and ’80s, KCC supported the internationalization and development of shipbuilding and construction by leading the dissemination of mini-computers and communications equipment.

Based on the foundation constructed by KCC, Korea was able to flourish as a world-class IT nation after 1990. I believe this is the realization of KCC’s business mission, which was to complete the third industrial revolution, the information revolution.

The IT industry holds high potential in itself and significantly influences other industries at the same time. Because Korea was suffering from being one step behind in the first and second industrial revolutions, it was necessary to rapidly respond to the third industrial revolution to boost the nation’s economy and industry. This was one of the historic missions of KCC, and we believe that we have successfully completed the mission.

However, times are changing, and the company is receiving new missions all the time. Marking the company’s 50th anniversary, KCC has been expanding into other business fields, including automobiles, construction and energy. Although it started as a first-generation IT-only enterprise, KCC is inevitably expanding to meet the needs of changing times.

Various businesses that KCC has recently been conducting are forming organic relationships within the new paradigm of the fourth industrial revolution, and they are being integrated into a new kind of industry. I think that now is the time for KCC to seriously contemplate the direction it needs to pursue to achieve its goal of maximizing consumer happiness and contributing to the country and development of humankind. KCC is going to put constant and heavy effort into preserving our tradition as a company with a proud historic mission and spirit of challenge.

I would like to express my sincere gratitude to our executives, staff and customers, who have shown great trust and support for KCC. I wish for all of these people to accompany us on our eternal step forward. Thank you.