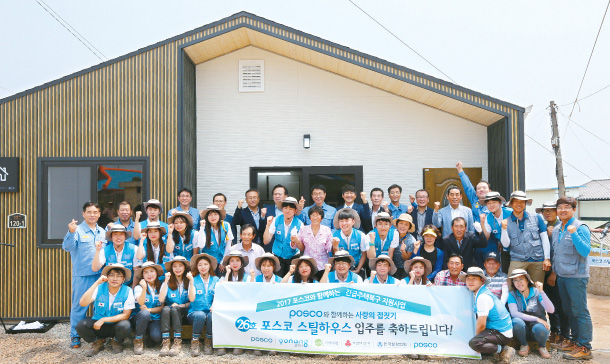 Since its establishment in 1968, Posco has participated in diverse social contribution activities. The steelmaker began its social contributions with its sister village activities in 1988. In 2003, it officially founded the Posco Volunteer Group, dedicated to enthusiastically giving back to the community.

As a part of the company’s corporate culture, executives and staff members, including the CEO, are permanently engaged in volunteer activities.

Once a month, Posco designates a “Sharing Saturday” to do volunteer work at welfare facilities.

The steelmaker is now concentrating on the Posco Steel Village project, its social contribution business that reflects the needs of the society. Posco Steel Village uses Posco’s steel to construct houses, steel playgrounds and steel bridges for communities.

The project started in 2009 when Posco cooperated with the Ministry of Public Safety and Security to provide steel-houses to victims of fire damage.

The company has added low-income households as beneficiaries to the project as well. The total number of steel houses donated by the end of November will be 29.

The firm is also keeping its eyes on supporting those in foreign countries as well. In Vietnam’s Vung Tau province, Posco created a Steel Village with total of 104 houses, steel bridges and steel playgrounds. Over 500 local residents will be able to live in new homes.

In addition, Posco’s college student volunteer service group called Beyond also took part in the construction of steel houses by painting the interiors and exteriors of the village, constructing walls, delivering building materials and welding.

Posco’s Steel Village project has received a “SMART” designation from the UN, and was listed as an outstanding example of an execution of the UN’s Sustainable Development Goals on Nov. 3.

The “SMART” designation is given to projects that meet the following five standards: specific, measurable, achievable, resource-based and time-based deliverables.

Kwon Oh-joon, chairman of Posco, remarked that “The fact that Posco’s Steel House Project has been registered as an outstanding example of the UN’s Sustainable Development Goals proves that Posco has gained approval from the global community and that the company is putting efforts into global welfare. The company is going to vigorously carry out other social contribution activities in order to make the world into a better place.”

Additionally, Posco sent a donation on Nov. 17 to assist recovery efforts after an earthquake hit the southeastern city of Pohang, North Gyeongsang on Nov. 15.