Briton bikes from Busan to Seoul

Briton bikes from Busan to Seoul 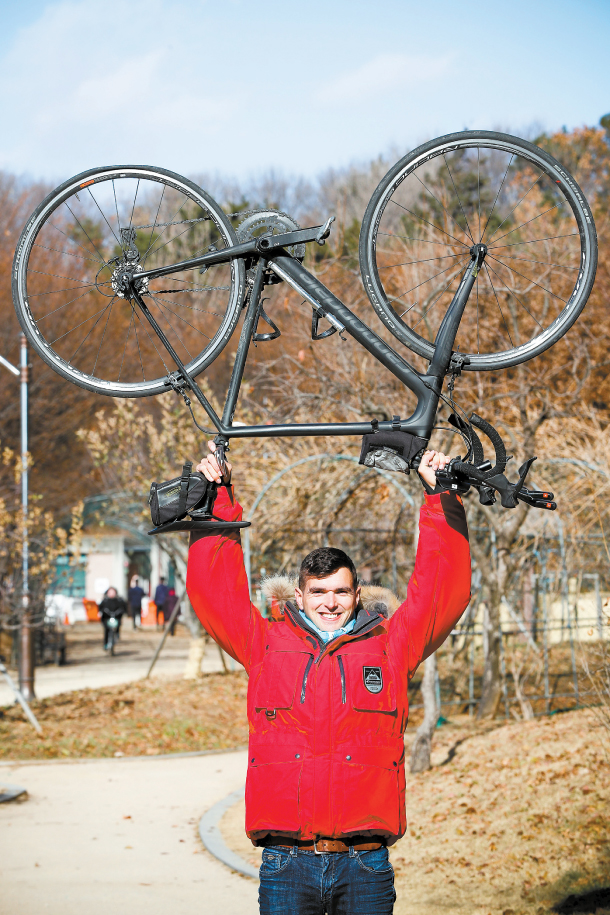 After appearing as a panelist on the popular television variety show “Abnormal Summit,” London native James Hooper poses for a picture during his Busan to Seoul cycling challenge in September for his One Mile Closer non-profit organization. [KIM KYUNG-ROK]

The youngest Briton to climb Mount Everest, at age 19, recently cycled 325 miles up from Nakdong River in Busan to Mount Namsan in Seoul to mark the 70th anniversary of Korean independence.

“The night before we left,” recounted James Hooper, “it rained so hard that the water reached up to our knees. But those unpredictable moments that come with an adventure make me feel so alive.”

The 30-year-old adventurer, originally from London, moved to Seoul in 2010 after losing his best friend, Rob Gauntlett, while climbing Mont Blanc a year before.

Gauntlett and his friend, James Atkinson, were abseiling down the mountain when a column of ice sent them 2,000 feet to their deaths.

In memory of them, Hooper founded a non-profit organization named One Mile Closer in 2009 to raise money for Nalango Secondary School in Uganda.

He has since led two cycling challenges in South Korea and four others in various European countries.

At this year’s cycling challenge from Busan to Seoul, Hooper cycled with 30 others to raise 15 million won ($13,950), donating half to Nalango and half to the Purme Foundation, the nation’s first non-profit organization that provides physical therapy and emotional support for people with disabilities since 2005.

It was the first time One Mile Closer donated to another non-profit organization in Korea.

“More opportunities need to be given to youth,” said the cyclist. “I was able to become an adventurer because I was privileged enough to learn how to bike and climb since I was young.”

Hooper is also the recipient of the 2008 National Geographic Adventurer of the Year award for his “record-breaking expedition ‘180 degrees - Pole to Pole Manpowered,’ which lasted 396 days, skiing, dog-sledding, sailing and cycling through 14 countries.”

After growing tired of his life in London, Hooper recalled stories he had heard about Korea from a friend who lived there for three years. “I was drawn to Korea because it has a completely different culture and language from England,” Hooper said.

While enrolled as an undergraduate geography major at Kyung Hee University in 2010, Hooper met his current wife through the school’s hiking club, and appeared as a panelist on JTBC’s popular television variety show “Abnormal Summit.”

Hooper is also a “motivational speaker” who presented at TEDx St. Lawrence College after his Pole to Pole Manpowered expedition.

“People tend to make excuses that ‘it’s too cold outside’ or that they ‘don’t have time’ when they think of running in a marathon,” said Hooper, “but they should instead start thinking about what they should work on first to run a marathon.

“They can begin by doing a 5K run or committing to run around a school yard at least once a day.”