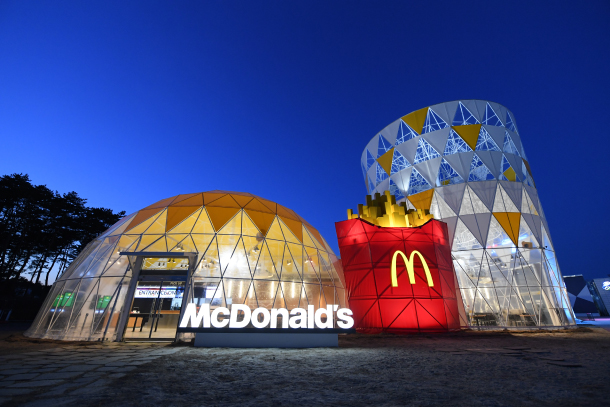 The McDonald’s in Gangneung Olympic Park is shaped like a hamburger and fries. [MCDONALD’S KOREA]

What will be the most popular place at the PyeongChang Winter Olympics? The long queues forming outside the McDonald’s at Gangneung Olympic Park might offer a clue.

The fast food chain is an official partner of the Olympic Games and running two restaurants in Gangneung, where the ice events are being held: one at the Olympic Park and one in the Olympic Village.

The Olympic Park branch has especially drawn attention even before the Games open for its unique design — from the outside, it looks like a meal, literally, with the building shaped like hamburger, fries and drink. McDonald’s is actively doing its part to promote the PyeongChang Winter Olympics by sharing pictures of the two restaurants on social media. 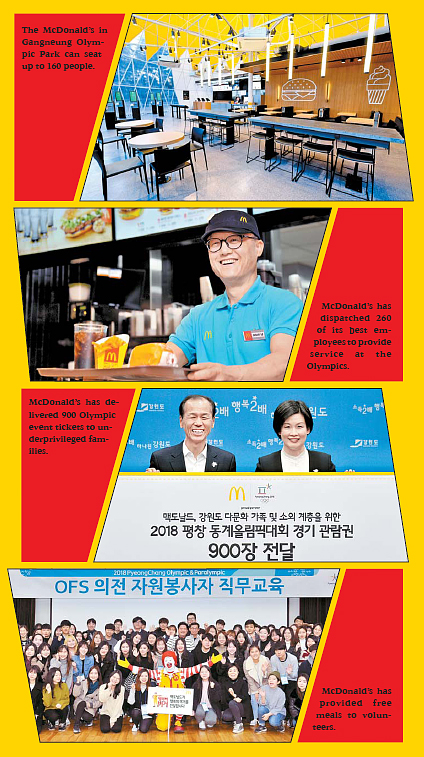 This year is a landmark one for the American franchise as it celebrates its 30th anniversary in Korea. The first McDonald’s in Korea opened in 1988, when the Summer Olympics were held in Seoul. It is fitting, then, that McDonald’s has come full circle, celebrating its 30th year of business in Korea with another Olympic Games.

The two McDonalds in Gangneung provide food to athletes and visitors from around the world. The company has dispatched 260 of its best employees to serve them a special menu developed specifically for the Olympics. 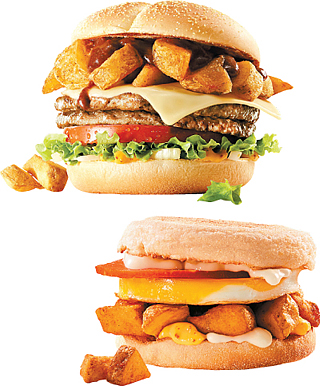 The restaurant in the Gangneung Olympic Park, where the ice arenas are clustered, is about 480 square meters (5,170 square feet) with 160 seats. The exterior of the restaurant is shaped like a meal set, offering visitors endless delight.

A photo zone in front of giant fries sculpture offers visitors the perfect angle to capture their special Olympic memory. Already, throngs of people are crowding outside the restaurant to snap pictures.

Since the 1996 Summer Games in Atlanta, McDonald’s has been running official Olympic restaurants in villages at every Olympic Games. The restaurants have proven popular at the international events.

To ensure quality service, McDonald’s has been running its Olympic Champion Crew program since the 2000 Summer Games in Sydney. For the PyeongChang Winter Olympics, McDonald’s selected 260 employees to be part of the Team Korea Crew and act as brand ambassadors for the company. They are currently providing athletes and visitors with the best service ever.

“I believe the employees of the athletes’ village restaurant are also national team leaders,” said Yun Mi-sook, manager of the Gangneung Olympic Village McDonald’s. “They are doing their best to provide the best food and service. They support the athletes and give gifts, fostering McDonald’s as one of the Olympics’ go-to place.”

McDonald’s is also supporting its employees by offering them a chance of a lifetime to watch the Games. The support includes free tickets to events and four-star accommodations.

At every Olympics, McDonald’s has created a custom menu and PyeongChang is no different. On Jan. 30, McDonald’s announced a special-edition PyeongChang Hanwoo Signature Burger with a limited supply of 10,000. The burger uses the region’s signature beef known as hanwoo. The aim is to promote the Olympics while reviving the economy of Pyeongchang County, Gangwon.

In order to create the new burger, McDonald’s worked with the National Livestock Cooperative Federation over three years to source the beef. Four-hundred McDonald’s branches reportedly sold out of the burger within 30 minutes of launch.

In response to the hype, McDonald’s introduced a second Olympic burger: the Golden Potato Burger. The potato, a signature crop of Gangwon, has a crispy and savory profile. The combination of white cheddar cheese and pine mushroom sauce evokes the image of white snow. It has been loved by many for its appetizing taste.

McDonald’s has used the Olympics as an opportunity to help the neediest in society. On Jan. 22, McDonald’s Korea donated 900 Olympic tickets to multicultural families in Gangwon. The company also sent tickets to firefighters and families of those who were injured or died on duty.

Additionally on Nov. 26, Dec. 2 and 3, McDonald’s visited the PyeongChang volunteer training site to deliver 450 Happy Meals to the hard workers and thank them for their efforts. McDonald’s will such activities through the rest of the Olympics so that everyone can share the joy of the Games across the country.

“The PyeongChang Winter Olympics are very special for McDonald’s because they celebrate our 30th anniversary in Korea,” said Joh Ju-yeon, the managing director of McDonald’s Korea who also goes by Melanie Joh.

“McDonald’s will fully support the successful hosting of the Olympics with the gratitude and love we have had for the last 30 years. We will also do our best to provide world-class food and service, so that all athletes and visitors can return with fond memories.”