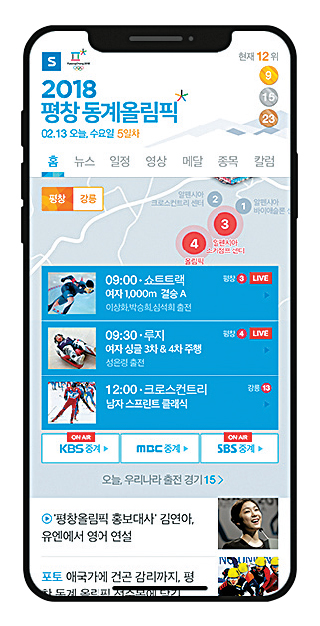 Naver has a special section on its site dedicated to Olympic news, broadcasts and medal counts. [NAVER]

Naver, the country’s most widely used portal site and an official sponsor of the PyeongChang Winter Games, has set up a special section for Olympic coverage on Naver Sports that includes live broadcasts of major events, up-to-date medal counts, news, travel reports and field reports.

Since the opening ceremony on Friday, Naver Sports and Naver TV have been streaming major events including short-track speed skating and hockey. An athletes’ spotlight section includes 145 on-camera interviews with athletes, including figure skater Choi Da-bin, whose video has already garnered more than 600 million comments and messages of support.

Novelist Kim Do-yeon, who hails from Pyeongchang County, Gangwon, did a travel story about sites of interest around her hometown. It has been viewed over 140,000 times.

Athletes are filing reports from the field, offering commentary on everything from Olympic rivalries to restaurants in the Olympic Village.

Naver has also equipped its AI platform Clova with the ability to answer Olympics-related questions. Owners of a Clova voice-activated speaker can ask for bios of athletes, game schedules and rankings. A Clova-enabled LG U+ IPTV set-top box can switch to an Olympic broadcaster upon request. All a viewer has to do is say “Turn on the Olympics.”

Through its apps, Naver is providing special services for visitors coming from around the world. Navigation, weather forecasts and recommendations for restaurants and lodging are provided in different languages.